I just finished reading John McPhee‘s Oranges.  It’s a fascinating book (and an easy read at 149 pages).  One of the interesting passages concerns Indian River, Florida.

Indian River is where the best oranges in Florida come from (they commanded a $1/box premium in the Northeast – and that was in the 1960s).  It’s also quite resilient to freezing as it is on a tidal bay.  What’s interesting about the area is how it has changed over time.  Here’s how McPhee describes the life of the original post-Civil War orange farmers:

The plantation society of the St. Johns was fairly metropolitan in contrast to life on the Indian River.  Families had settled all along the Indian River, but even twenty years after the Civil War they were few enough so that when they saw a sail miles away they could usually tell by the cut of it who was approaching.  At night, a family would go out in a small boat, light a lantern, talk, drift, and in thirty minutes catch enough fish to feed them for a week.  On trips for supplies in sailboats, they would sometimes see ahead of them a darkness formed on the water’s surface by five hundred acres of ducks.  As a boat approached, the ducks would rise with a sound of rolling thunder, leaving on the water five hundred acres of down.  Everyone slept on down pillows and down mattresses.  The river was full of oysters.  The shores were full of cabbage palms, whose hears, boiled, were delicious.  Currency was almost unknown.  The nearest bank was in Jacksonville.  When families put up Northerners who came for part of the winter, payment was often made by check at the end of a visit.  For months, these checks would go up and down the Indian River as currency, until they had so many endorsements on them that they looked like petitions.  In Titusville, near Merritt Island at the north end of the river, there wa a group called The Sons of Rest.  Any member who was seen with perspiration on his face was fined twenty-five cents.  At the end of each month, the money was used to buy a pair of overalls for the member who had worked the least.  A man named Cuddybuck won four pairs of overalls in a row and the organization disbanded.  there was one lawyer on the river.  He raised oranges because the practice was so small.

However, the good times didn’t last as first the railroad came and then land promotion led to speculation.  By the time McPhee was visiting in the early 1960’s, things had changed substantially:

…Aerospace [NASA – it’s right near Cape Canaveral] industries, residential housing, and places like Ramon’s [a bar] are taking over so rapidly that in a few years there will be no citrus trees on the island, with the exception of those owned by the National Aeronautics and Space Administration.  Hill’s son has built a new house next to his father’s, and he will probably stay there even if the family grove is cut down.  He works for R.C.A.  No space-age Chekov is going to write a play called The Orange Grove about the Hill family of Merritt Island.

McPhee was largely prescient.  Take a look at what the place looks like today: 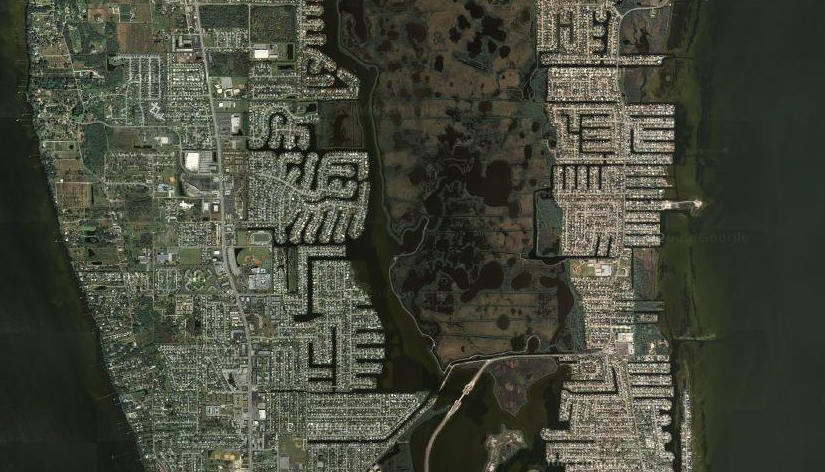 The orange grows have been plowed under and replaced with communities engineered so that everyone gets a space on the sea: 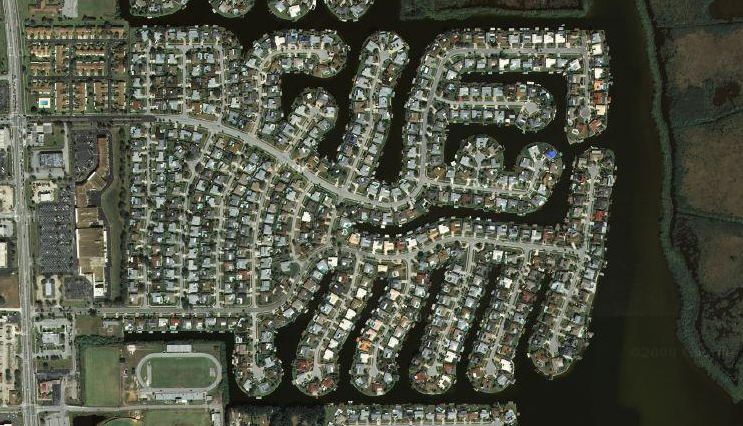