When I told my friend Dave that we were going to spend a few days in the Blue Mountains, his immediate reaction was “You’ve got to hike the National Pass – it’s one of the five best day hike’s I’ve done in my life.”  Dave is probably the most outdoorsy person I know, so this was akin to Tiger Woods recommending a gold course – you’ve just got to do it.

The National Pass is one three interesting hikes you can do from the town of Wentworth Falls.  The first is called Darwin’s Walk and you literally trace the route Charles Darwin took when he walked to the actual falls.

It’s one of the most peaceful walks I’ve done.  We ambled through a slight valley, following a stream.  There were ferns lurking below tea leaf trees and then up the slopes grew bushes, pines and eucalyptus.  It was layers of green upon green: 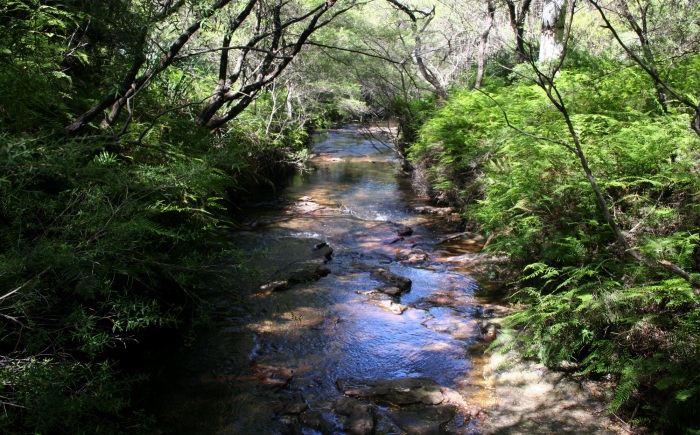 Eventually we came to a hollow where an ancient river had carved out an overhang where a ‘hanging swamp’ now grows: 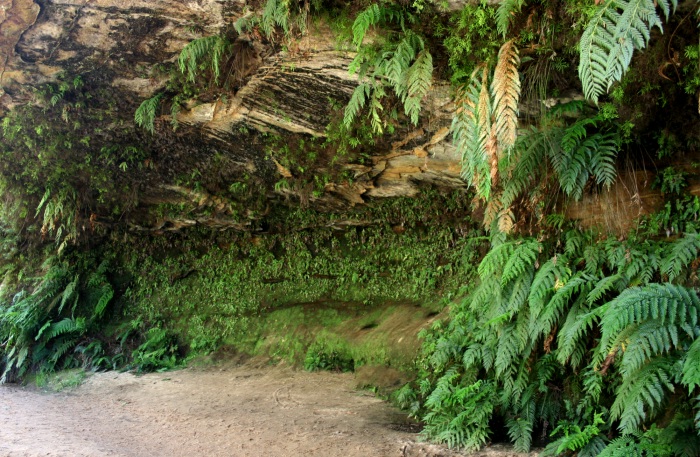 Along the way we saw different types of parrots and marveled at the lack of sound.  When we were there, we saw almost no one and it was completely serene.

We retraced our steps and continued past where we started to find the “Weeping Rock” – a prelude to falls.  Unlike the real falls, we could stand on top of the rock and comfortably look straight down: 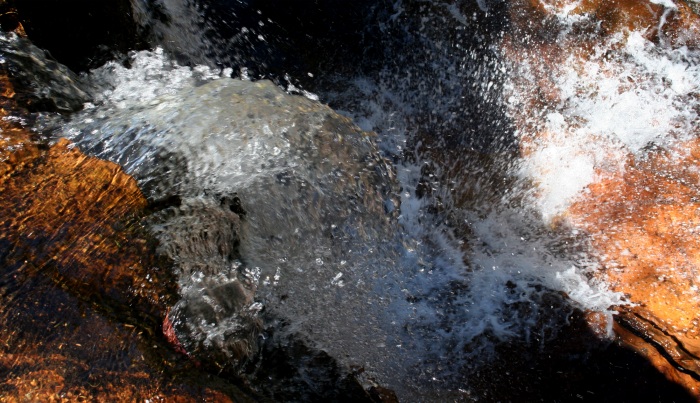 From Weeping Rock, we descended a few meters and crossed the top of Wentworth Falls.  This bears a bit of description, as we actually started at the top of trail and hiking down.  This was because the Blue Mountains aren’t actually mountains, rather they’re an escarpment.  All the towns (like Katoomba, where we stayed) are on the top of the escarpment and you actually climb down the rock face; a few hundred million years ago it was a coral reef.

When we crossed Wentworth Falls we walked up to Rocket Point, which required walking through a rock arch.  It was the first place where we could get a sense of the size of the falls.  The scale is massive: the falls drop 100m, form a pool, and then drop 100m further into the forest below.  The scale is made more impressive as Rocket Point juts out over the falls, leaving us with a vertigo-inducing view of the trees directly below.

The picture below is a little tricky to understand.  Standing on Rocket Point you can look down to the ledge below Wentworth Falls (right) and then simultaneously see the forest a further 100m below that (left).  The shadow gives you a sense of how high the falls are – each of those tree canopies is probably 10m wide:

At this point we started to get confused.  According to our map (“One Day Bushwalks in the Blue Mountains” – $3 at the Paddy Pallin‘s in Katoomba; well worth the price), the National Pass was supposed to start there, but we were literally on the edge of a cliff.  As we looked across the gorge we could see a trail hugging the opposing cliff face, but how to get there?  And then it dawned on us – the National Pass literally consists of a set of stairs that take you halfway down a cliff and then clings to the side of that cliff until it spits you out at Empress Falls.

The hike down the stairs is mind blowing.  At times, we were ducking under sandstone ledges with only a guard rail protecting us from a multi-hundred foot plunge: 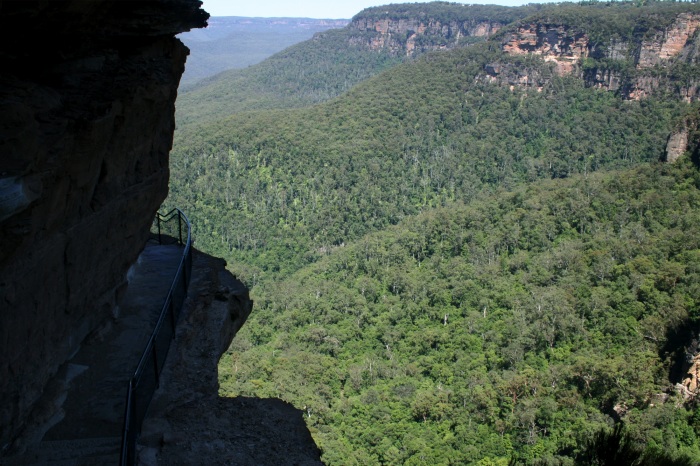 I peeked over the ledge, and was confused as I felt like I was in a 14th century painting where the perspective is all wrong.  I could see the trail to my left, but then there it was also directly below me – and further below that.  Here’s a photo of what this looks like, taken from the other side of the gorge: 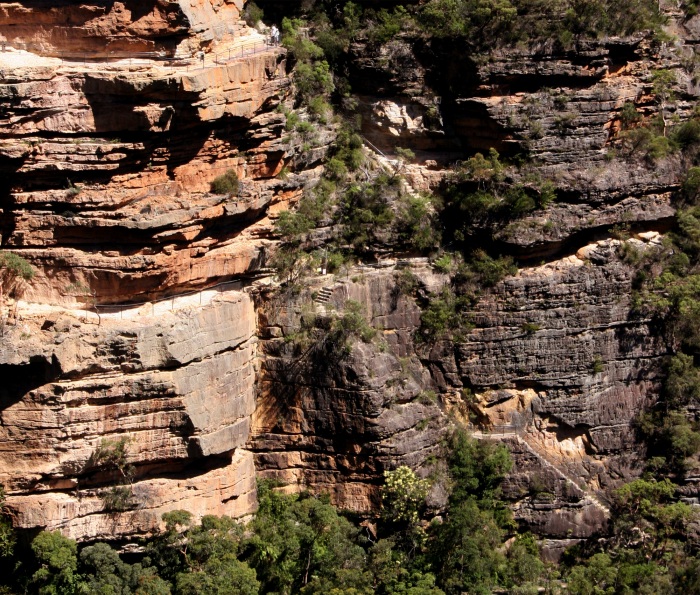 When we got down to the level of the traverse we could look up and gaze at the falls.  Since it’s the dry season right now, there was not much water and the wind was whipping the droplets of water coming over the falls; at times it flowed upwards:

As we followed the traverse we had the perverse sensation that comes from having a 100m cliff both above and below us simultaneously.  It’s unlike most hikes I’ve done.  Normally you hike somewhere and gaze upon something stunning; on the National Pass you have the sense that you are actually part of something stunning.

The walk continued and shortly came to Den Fenella.  This is a point in the trail where it makes a slow curve.  We stopped and looked up and our entire field of view was dominated by a sheer cliff.  It felt like we were standing at the focal point of a vertical sandstone amphitheatre.

Continuing on we were treated to more splendors.  Occasionally a red-breasted parrot or a flock of cockatoos came flying across the valley.  At times we bumbled along underneath rocky outcroppings.  And all the time we just had to look left to see the forest canopy below us, staring back at us from the exact opposite perspective we’re used to:

The National Pass ends at the Valley of the Waters and that’s where we decided to hike to Vera Falls.  This is officially off the beaten track – there’s even a sign that says that the trail is not maintained and not for the faint of heart (Wendy always loves a challenge).

The track down to the falls was noteworthy in that at times we came upon thickets of giant tree ferns.  One group we saw had trunks that were up to 30ft tall and easily the biggest ferns I’d ever seen.  At other times we had to push aside vines hanging down from the trees they were slowly strangling.

Towards the end of the trek, the trail became downright miserable.  Forks appeared in the road and we had to guess which way to go (hint: listen for the falls).  A certain section had eroded to be about a foot wide – and conveniently this was at the point where there was a 100ft cliff (and it goes without saying there were not guard rails there).

However, it was all worth it, for when we got to the falls, we had a spectacle that few will ever get to experience.  We stood on a rocky promontory on a waterfall surrounded by forest with nobody else and no guard rails.  We stared out at the surrounding forest and cliff; looking down we could see a pool of water forming over a hundred feet below.  In the distance were two cliff faces, preceded by cascades of jungle that seemed to blend together into one layer.  The only sound was the water smoothly and coldly flowing over the edge of the falls.  It was a surreal experience. 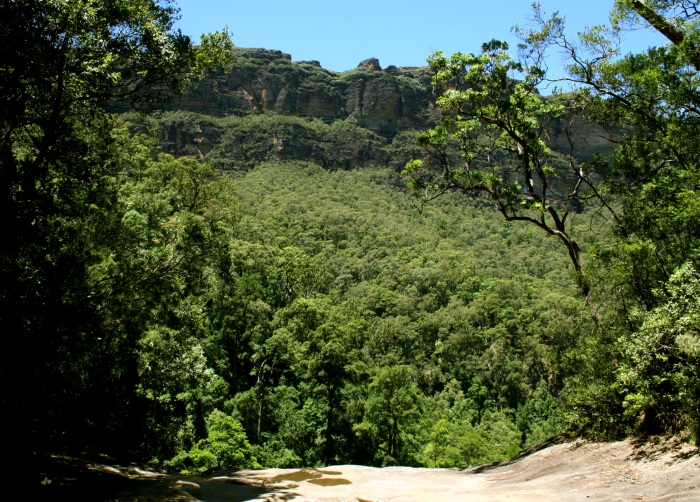 As we climbed out of the Valley of the Waters we entered a temperate rainforest and passed by multiple sets of waterfalls (Sylvia & Empress Falls).  There were ferns everywhere and everything was coated in a fine mist.  The more adventurous abseil down the falls in wetsuits and then hike out: 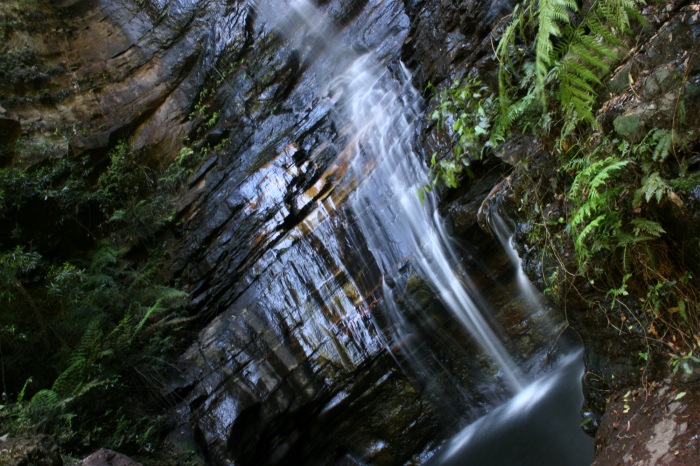 At the top it was a short walk back to the car via the Overcliff/Undercliff paths.  Both afforded us the chance to see the valley below in its entirety and appreciate the scope of what we had just hiked:

So was it one of the five best day hikes I’ve ever done?  Absolutely – it would be criminal for you to go to Sydney and not try it.

If you do, here’s a copy of the map so you can get a sense of what it’s going to be like (but buy your own copy: this little picture is not enough to get you through the hike): 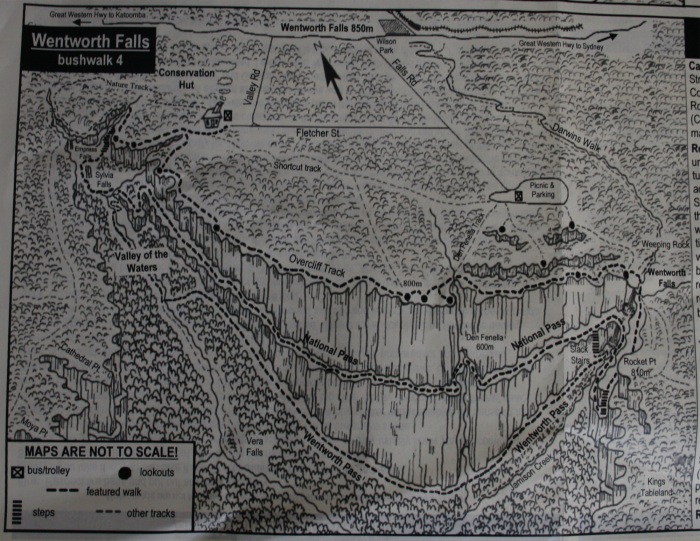