About a week ago, Wen and I got back from our honeymoon in Wyoming (this blog has been dark for two weeks as the combination of honeymoon + moving to new apartment upon return + crazy work has made it tough to blog).  It’s a beautiful – and culturally very different – part of America.  Here are a couple of notes for you:

one We were told by some locals that people in “Wyoming” are family-oriented.  I’m not sure what this is a euphemism for (likely “socially conservative).  After all, I live in the Northeast and people don’t regularly abuse their kids or similar things out here.

Ironically, on our last night in town we sat next to a table of cowboys.  Turns out that they’d made the wives and kids eat at another table in the restaurant.  And one of the cowboys offered the waiter a chance to sleep with his wife in return for 50% off the bill.  Judging by the heavy eyeliner and sagging halter top on her, I’m not sure he was joking.

two Wyoming is the least populous state in the Union, checking in at a little over 500K people.  This means that they also have the most unique license plates in the Union.  Take a look at the generic plate below.  The number on the left represents the county you’re from; the right is a number assigned to you.  We didn’t see one that went above 5 digits! three Montana may officially be “Big Sky Country”, but Wyoming is a close second: 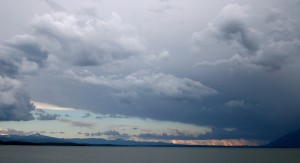 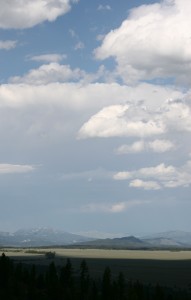 four Continuing on our license-plate theme, when I was a kid, when our parents took us on American road trips, they’d trick us into being quiet by asking us to try and spot the license of every state.  The place to do this is Grand Teton/Yellowstone.  I’m convinced that I saw every state there; the Lupine Meadows parking lot looked like a governor’s convention, there were so many different states represented.

five the only challenging part of Wyoming is that you quickly learn that people’s ability to drive is inversely proportional to the size of their vehicle-and people in Wyoming like their vehicles big.  Now everyone knows that people with SUVs are vehicularly challenged (witness the gravel road that some people took at 20 km/h: people, you’ve got a 4×4!) but Yellowstone was ridiculous.  People there had land-based aircraft carriers: 30 foot long behemoths with cars in tow – and they took at least as long as an aircraft carrier to turn (I think I saw little tug boats helping them on tight corners).

Note that Yellowstone consists of two lane roads, so travellers: ye have been warned…

six One interesting fact we learned is that Wyoming is Utah’s playground.  Everywhere we went, even remote corners like 10 miles into the Targhee forest, we kept coming across trucks from Utah.  Apparently the state sport there is heading up to Wyoming on long weekends and set up trailers in the middle of the forest and drink beer.

seven English in Wyoming is a living language.  “Buffalo” is slowly transmuting into “Bison”.  More worrisome is the pronunciation of “creek” as “crick”.  I had a great time asking my cowboy horse riding guide the name of yonder crick.

eight Cowboys in Wyoming are a hearty and dynamic lot; they have had no challenge adapting to the 21st century.  We met some who constantly used the air conditioning in their cars and carried plastic water bottles on the trail to stay hydrated.  Nothing too fancy there.

Then they started telling us that they want to get satellite tv in their camp because they’re bored of one another (What!  No songs around campfires every night?) and that they use Google AdWords to buy keywords to advertise their services.  Technology: 1, old way of life: 0.  Now we just need to work on the Amish.

nine Wyoming has the craziest weather of any place I’ve been.  We were told that there is snowfall on record for every day of the year except August 16th.  When we hiked, we came across more snowdrifts than you can imagine; snowball fights on the 4th of July in the mountain are routine.

It thunderstormed every day we were there; the lightning seen across the valley was amazing.  One thunderstorm was followed up with some particularly aggressive hail – nickel-sized balls bouncing off the ground.

ten Jackson is home to the National Museum of Wildlife Art.  It’s a fabulous little museum with a great selection of wildlife paintings; they feature a lot of American art of life on the plains plus a quick historical tour of how wildlife painting has evolved.

One thing that became eminently clear is that when men paint pictures of bears, they turn into imbeciles.  How else can you explain William Dunton calling the following “Monarch of all he surveys”:

Or Charles M Russell calling this “To the victor belong the spoils”:

The museum also reminded me of what a small world it is.  The museum has a prized (and fantastic) collection of art by Carl Rungius.  In 1910, he was invited by Jimmy Simpson up to Banff to hunt; he subsequently painted many of the hunts.  Later in his life, Simpson would build Num Ti Jah lodge – where I had been married less than a week before.