DJ Premier.  DJ Scratch.  They’re two of the biggest hip hop dj’s of all time (Note: if you have no interest in this, skip this post).  Between them they’ve over forty years of experience (in an art form that’s maybe 30 years old) and have produced more hit records and created more unique beats than just about anyone else.  So imagine my glee when I heard that they were performing a free concert tonight at the Red Hook ball fields. 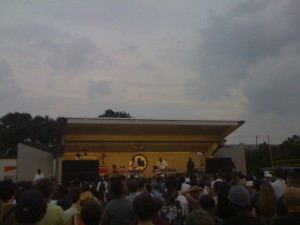 The show was insane – easily one of the best hip hops shows I’ve ever seen.  They started off by playing some pre-hip hop tunes: the originals that were sampled by early hip hop pioneers (think Steve Miller Band and the O’Jays).  This was followed by them playing some early hip hop and then on to some recent favourites.  And all the while, they’d alternate songs in a classic battle.

The battle wasn’t really a battle; in the end it was Premier playing straight man to Scratch.  Scratch started off by living up to his name with this rework of Herb Alpert’s Rise.  The man would not be stopped: Sex Machine was double-timed to make James Brown even wilder while LL Cool J developed a stutter on Rock the Bells.  He slowed down Tribe’s Scenario by looping “Change your little drawers ’cause your pants are saggin'” to a crawl and then stood in front of the decks – still mixing – and started pulling down his pants to reveal his Superman drawers.

Don’t just take it from me: listen.  Here’s Scratch working over Run DMC‘s Here We Go (Live at the Funhouse).  Note the point where he starts looping “So kick off your shoes” again and again.  What you can see is that he’s taken his shoes off while DJing and used on to stop the turntable.

Here’s the outro from the night (apologies for the yell at the start); again, it’s some Run DMC, but this time Peter Piper.  Listen for the end when all you hear is “there it is” looped again and again.  The man’s hands were on fire and I thought he’d melt the max.  Then he had DJ Evil Dee come up on stage and the two took turns scratching, each doing one cut after the other.  They would literally walk around each other every second to do so.  Then at one point, Dee used his gut to stop the record (I can’t make this stuff up; you really just have to see it).

The other comment I’d make is that the crowd lived their hip hop.  I’ve never been to a hip hop show where the crowd knew every word to every single song.  I like hip hop, but these guys (and girls) love their hip hop.  The definition of true fans.