A few weeks back, Wen and I went to see Richard Mosse‘s The Fall at the Jack Shainman gallery (more Mosse photos).  Mosse is a great photographer who travels to the edges of the world to capture images of catastrophe and then prints them on a massive scale.  I highly recommend reading his recent interview over at BLDGBLOG (then read the older one).  This paragraph captures the spirit of his work:

So how is the catastrophe popularly represented? Through terrorism. Terrorism is a gesture of advertising; it’s a literary act, a form of representation, before all else. Its aim is not primarily to kill, but to capture the popular imagination through killing. It’s for this reason that I’m drawn to the air disaster: there is no finer, more succinct, more international, and more culturally loaded expression of the catastrophe than a plane crash. An airliner in vertical descent is a spectacle of modernity’s complete failure.

Here are some shots of his work from the exhibit; I’m aware you’re not supposed to take photos in art galleries, but his works are magnetic and I couldn’t help myself: 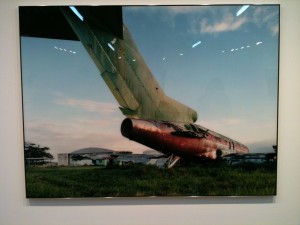 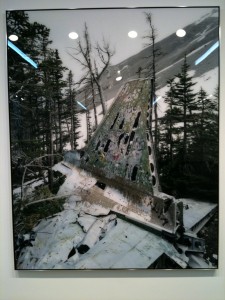 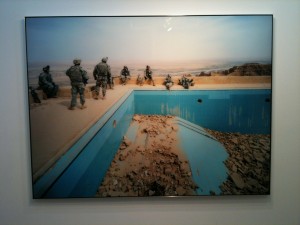