I was going through my photos today and found this one: 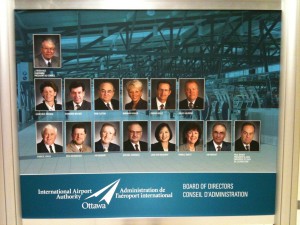 Now, you might be reasonable asking: “Lindsay, why on earth would you want to take a photo of a photo of the Ottawa airport’s board of directors?”  Because this is a great example of monopolistic excess.

When you arrive in the Ottawa airport domestic terminal, you’re greeted with this ad.  It’s conspicuously placed so that almost everyone has to look at it.  Since Ottawa’s the nation’s capital, a lot of politicians and assorted ‘important’ people must pass through the airport, and I’m sure the board thought this was a great way to get some exposure for themselves.

I, however, am neither important nor interested in the details of the board.  What I’m more interested in, is what does not appear on the ad.  There’s absolutely no way to contact any of these folks.  If you’re like me, and it’s 1:30 am in the morning and you’ve been waiting for 45 minutes for your bags because a) there wasn’t a gate ready for your plane [think about that-that means that the tower assumed your regularly scheduled plane wasn’t going to arrive.  Does that mean they were assuming a crash?] and b) there were two other planes in the same boat and therefore no baggage crews, you might want to reach out to these folks to explain a teachable moment.

However, this ad is, instead, a monument to corporate self-gratification.  There’s no way to contact these people and instead they simply gloat over you as you await your bags.  No phone number, no email address, no website.  Nothing  It’s unintentionally the ultimate symbol of monopolistic hubris.

I know there’s not a lot that can be done to stop the monopoly that an airport’s going to have in a (relatively) small town like Ottawa, but some high speed rail would sure go a long way to making life a little more awkward for that board (Ottawa-Montreal and Ottawa-Toronto are the bread and butter of the airport).  And that wouldn’t be a bad thing.