Wen and I are fortunate to have great friends.  A few of them (randomly) ended up giving us gift certificates to Gramercy Tavern when we got married and we finally made it the other night.  As we were basking in the glow of a ridiculously good meal, Wendy mentioned “how did we get here?”  I couldn’t help but think of how, at least for me, a couple of decisions that – at the time – seemed irrelevant have massively shaped who I am today.  (Note that this is not an original notion; complexity scientists call it path dependence).  Here are a couple of those events:

When I was in high school, you applied for three different university programs in descending preference.  I didn’t get into my first pick – computer engineering at the University of Waterloo.  Instead, I did engineering at Queen’s.  If I’d gone to Waterloo I likely wouldn’t know my current set of friends and almost certainly be married to Wen.  In fact, I’d argue that not getting into Waterloo is the best thing that ever happened to me (and that’s no knock to Waterloo as a school).

When I was at Queen’s every engineer did a common first year and then had to pick a discipline to specialize in over the next three years.  I had no idea what I wanted to do, but knew that I liked computers and math and physics.  Each discipline made a presentation and the Engineering Physics department invited a grad named Kamal Hassan to present.  He talked about how he had studied Eng Phys and learned lots of interesting math/physics/engineering but didn’t want to be an engineer and therefore became a management consultant.  I had no idea what a ‘management consultant’ was, but the program sounded like something interesting so I decided to do Eng Phys.  The training I received there continues to help me on a daily basis.  (And, in a weird twist of fate, I ended up becoming a consultant like Kamal and, freakishly, ended up at the same business school he went to)

After my 2nd year of school, I went overseas to London on a work exchange program.  There was a central organization that helped you find a job.  A list of positions were posted; you applied; and if you were to be interviewed, a notice was placed for you in a book (this was pre-cellphones).  This book had a very odd structure.  There were tabbed pages (by students’ last names), but the tabs weren’t rigid and you could open the book but it would be collapsing under its own weight if your last name started with a “w”.

One morning I went to check if I had any interviews and I had one-for a 150 quid/week job at Merrill Lynch. However, due to the collapsing book, I missed one for a 250/week at some publishing company. When I found out I missed out on a job that paid 66% more I was crushed (and I spent the summer living in pernury) – but years later I was  in a job interview and saw “Merrill Lynch” circled on my CV and knew that it had been worth it (if you ever meet me, ask me about that job at Merrill).

Finally, I didn’t get into any of the American grad schools I applied to.  Instead, I ended up at INSEAD.  Again, I met some truly unique people who I otherwise would not know.  More importantly, I got a special chance to work with a serial investor and startup in Silicon Valley.  This gave me the confidence to strike out on my own after school, and while that business wasn’t a success, it directly led to me getting my current job.

All of which led to us having dinner at Gramercy Tavern.  I don’t pretent that the only reason I was able to have dinner there was because of the decisions made above (after all, there are an infinite number of paths that could have led to me eating there), but at least I know which points in my life have made the biggest impact.

And as for the meal.  It was delicious.  The appetizer was a lamb papardelle with olives, lemon confit and swiss chard. 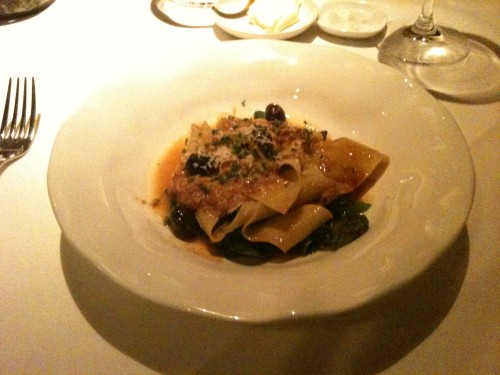 This was followed by venison loin and sausage in a Bourbon sauce and with a potato pancake: 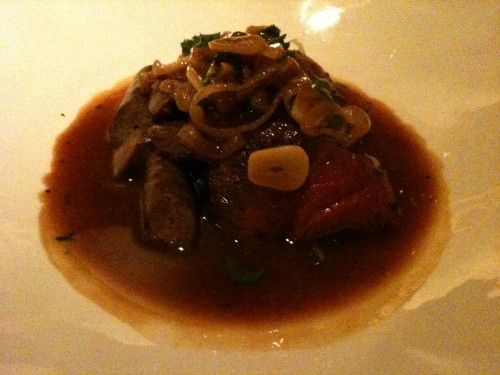 We quaffed it down with probably the best bottle of wine I’ve ever have – a 2001 bottle of Oddero Barolo: 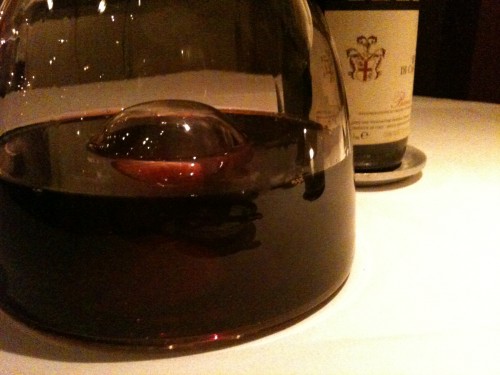 Finally, they gave us a little amuse bouche for the next morning – a piece of cocount cake with pear inside: 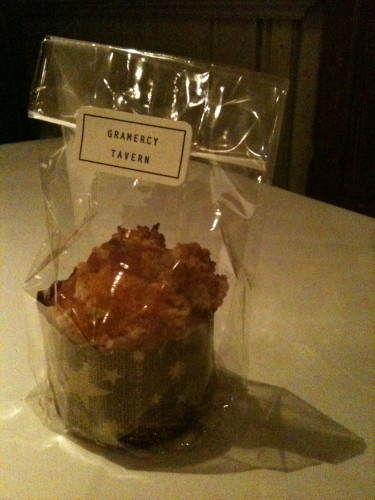