opinions on causeworld? there’s something bugging me about it. http://nyti.ms/coFtpR

CauseWorld in a cause celebre (sorry, couldn’t resist) of the web world right now.  The premise is hopeful: you use your phone to check in at various locations to earn “karma points” which you can then donate to a charity – and an advertiser pays for the donation.

Sounds like a win, right?  In return for you giving up some privacy (you can be 100% sure that your check-in data is getting sold to advertisers), the world becomes a better place.

When you choose to give money directly to a charity you have to make two conscious choices: the cause and how much.  Every person has their own complex calculus for arriving at the final decision, but it’s immediately clear to you what you’re doing as it’s your money and your choice.

CauseWorld changes this completely.  The first aspect is that you don’t actually know how much you’re giving as they are purposely hiding the value of the “karma points”.  For example, if you earn 30 karma points, you can donate clean water to one person in Sudan for one month.  30 karma points means that you have to check in probably about 6 times.

Now you can feel good because you’ve saved someone’s life for one month.  And what’s that worth?  Well, the brutal answer is, 30 cents.  You could have gone to GlobalGiving.org and saved 100 people for $30: 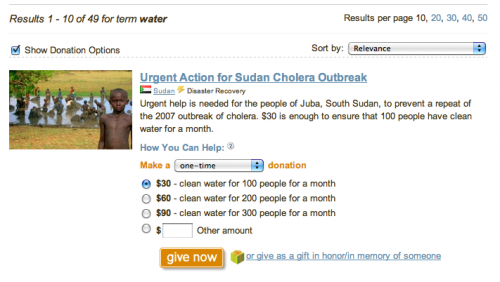 Similarly, maybe you wanted to use 100 karma points to get 1 pound of food for monkeys in the Congo.  That’s 20 check-ins.  And worth a whopping $1.  You could have gone to GlobalGiving and donated $25 to the exact same group to save the same monkeys (Jane Goodall Institute):

Let’s examine what your 30 cents means.  You’ve generated six data points that have probably been sold to a company (the sponsor) and will likely be sold to more.  You’ve given up a lot of your privacy as you’re now selling every single location you go to (each of your checkins corresponds to a geographic location; I’ll bet CauseWorld can pinpoint your home within six months of using their service).  You’ve had to look at multiple ads for sponsors.  You’ve also generated a tax break for the company that makes the donation because they are giving the cash instead of you.

What’s really bad, is that I’ll bet you’ll be less likely to donate your own cash to charity this year because instead you think you already gave via CauseWorld.  Lets say that last year you gave $100 to a charity.  That was a lot to give at once, but it didn’t take long and it felt good.  This year, to do the same thing, you’re going to have to check in 2,000 times (each check-in in 5 cents).  That’s a heckuva lot of work.  I’ll bet that after the first thousand checkins you slow down – if you even make it that far.  And this is where the damage occurs: you still think you’re giving to charity, but it’s at a much lower rate than last year.

There’s another issue here, too.  When you pick the charity, you’re donating to your agenda.  When you do it via CauseWorld, you’re only donating to their charities.  There is zero chance that any of their selected charities will go against the agenda of their advertisers.

We’ve seen this before: it’s called the health care system.  Your insurance company (CauseWorld) gives you a service that’s paid for by your work (advertisers) and you never see the price it costs for a doctor to fix you (the charities) – and you can only see certain doctors.  As a result you use too much health care, the price goes up all the time and you frequently can’t see the doctor you want/have to go out of your way to find a doctor.

CauseWorld is going to do the same thing to charities: you think you’re giving more because you’re spending more time ‘donating’, but really you’re not and you’re also not giving to the charities that really matter to you.

If I was CauseWorld my response to this would be:

a) We make it easier for people to donate during tough economic times.  This rings hollow.  No one knows if charitable donations are going to be down due to this recession, but America has gone through many recessions before and charitable giving has grown faster than the economy.

b) We open up giving to a new audience that normally would not donate.  This is not likely true either.  The article in the link above estimates that 70-80% of American households donate money.  These are the same people who are going to use CauseWorld (if this was not the case, P&G, Citi, etc. would not be lining up behind CauseWorld).  Therefore there just aren’t that many of them who aren’t already donating.  And, if you believe my logic above, they’re now probably going to actually donate less.