According to Doni (more on him later), about a million years ago, Mt. Bromo was 4.5 km high. But then, in a huge explosion that must have put Mt. Pinatubo to shame and caused a few of our Australopithecus elders to wonder why the Mastodon hunt was getting so much better, it blew up.

A huge caldera-with an elevation roughly half that of the prior mountain-was created. It kept erupting for a while, ejecting more lava and hot mud, until it had no more strength left. For a while the mud kept coming up but could only partially fill the caldera and Mt. Bromo is now a sulfurous rump of a volcano that pouts steam daily and erupts hot mud every 5-10 years. 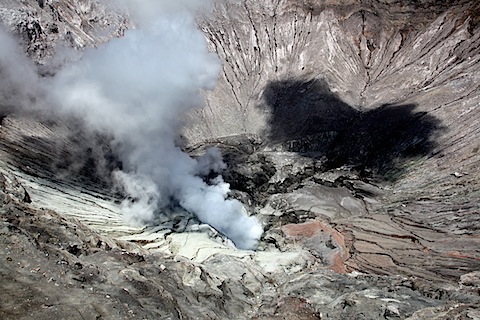 The volcano proper is in the caldera, a few hundred feet below the rim and across a wide swath of dusty land known as the sand sea. From the rim of the volcano you can glance down and see (and smell) the steaming sulphur below. In the other direction you gaze across the residue of past eruptions. The walk up also gives a clue as to how violent some of these previous eruptions were. 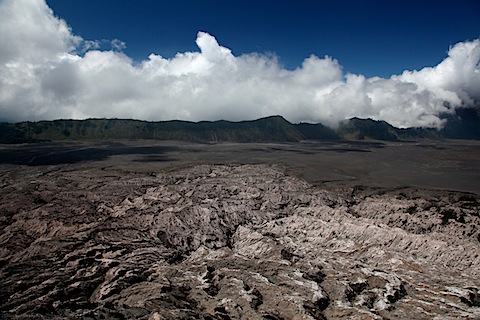 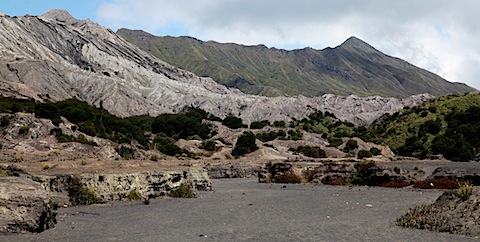 A few hundred (or maybe thousand; it’s not important) years ago the first humans came up to the mountain, took one look at the fertile soil and decided it was for them. Since then, they’ve been terracing every square inch of land that’s not downstream of the volcano and living a slightly-better-than-subsistence lifestyle. 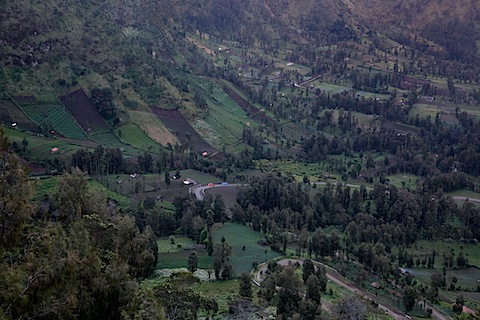 Many of the locals still ride horses; by day they either take them down to the savannah in the caldera to graze or cut feed there for them and manually hike it up the steep switchback trails.

The houses nestled amongst the fields are a scene of bucolic bliss and the people are incredibly friendly; we were greeted with hellos everywhere we went. However, I found myself wondering how difficult it must be to live at 2400m above sea level without electricity (it gets very cold and the mountains make the days shorter) next to a continuously erupting volcano and maintain such a positive outlook.

Over the past twenty years or so foreigners have discovered Mt. Bromo and they have carved out their own ritual. They developed an existence that coincides with the daily weather pattern. Here’s how it works:

5:30 pm – tourists coalesce at the somethingerather Indah hotel to watch the sun set over the valley and compare oversized cameras. 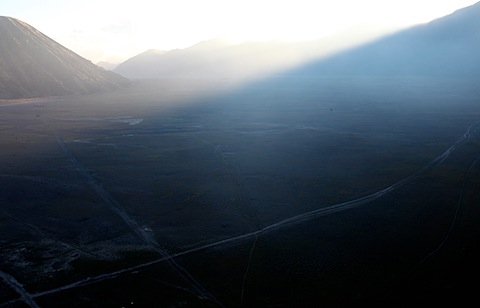 Most will fail to turn around and therefore miss out on the arguably more spectacular sunset taking place over the valley two kilometers below: 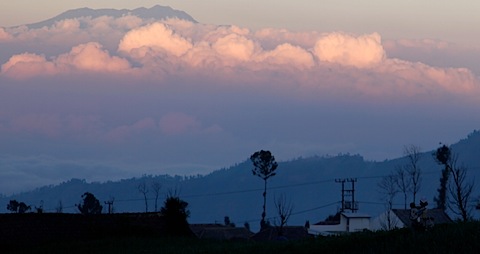 6:30 pm – the few restaurants in town are full and the fog begins to roll in. Soon the stars are hidden and it takes too long to get your meal.

8:00 pm – everyone is asleep or going to bed. For the first time in the day silence descends upon the town. It’s somewhat eerie, particularly because there is no background noise: no highways, no airplanes. Just a constant silence.

3:00 am – the constant silence is broken by the sound of underpowered lawnmowers lacking mufflers and masquerading as minibuses burping, farting and groaning up the mountain. These corral tourists and take most of them to waiting jeeps to be ferried across the sand sea of the caldera and up the opposite ridge to watch the sun rise.

Since Wen and I did not want to watch the sun rise with over one hundred other people (we later heard that people yell at each other to get out of the way for photos as the sun quickly rises) we decided to get an extra hour of sleep and then try a different route. Unfortunately, the hurricane strength roar of the lawnmowers trucks meant that we didn’t really get any sleep. If I was a resident of the town, I think I’d hate the automobile.

4:00 am – we’re up and off for a hike up to an observation platform on Mt. Penanjakan. The fog has moved out overnight and thousands of stars shine in the clear sky above us. As we hike we see occasional shooting stars and the sun begins to slowly rise in the east:

4:45 am – we’re making our way up a narrow path with only our headlamps to guide the way. After about 30 minutes we’re up at the top and the sun begins to rise. Mt. Bromo and friends appear in the soft light that briefly exists after the sun is up but before the first rays reach inside the caldera:

6:00 am – the fog starts to roll in again. As it hits the hot air above the actual volcano it’s pushed slightly upward, but the power of the volcano is nothing compared to the sun and can’t stop it from spilling in.

6:15 am – we’re on our way back down and, in the light, realize that we’d climbed up through a field of wildflowers: 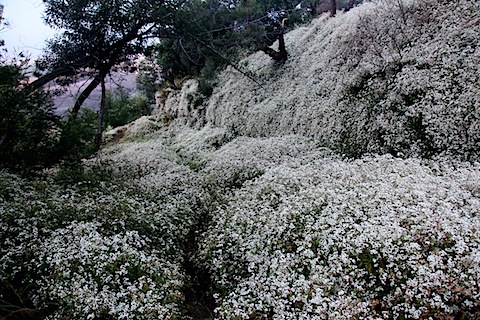 We also realize just how pretty the town is juxtaposed with the caldera: 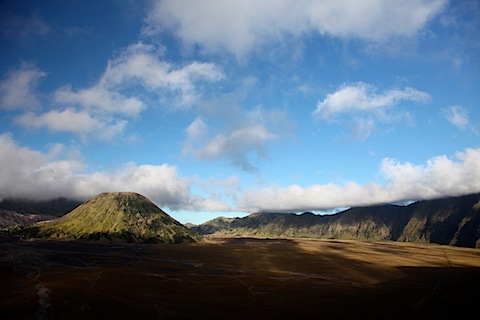 9:30 am – anyone awake at this hour will believe that they will never see the volcano and contemplate calling their travel agent as the fog is so thick that nothing is visible.

11:30 am – the fog has cleared and you can walk down into the valley and up the 247 step-topped slope to the edge of the volcano proper. On the way as you cross the sand sea you can’t help but notice how similar the terrain is to the prairie. This could almost be Alberta or Wyoming (or maybe southern Chile): 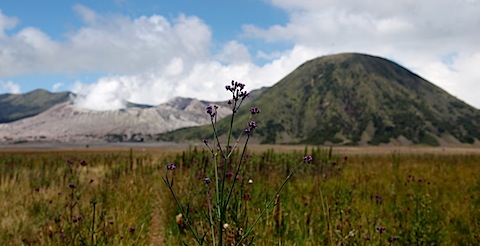 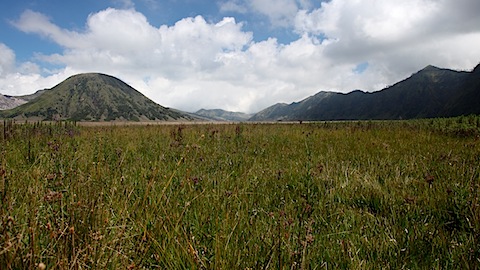 On your way up to the volcano, you may see a couple of dust devils winding across the sand sea: 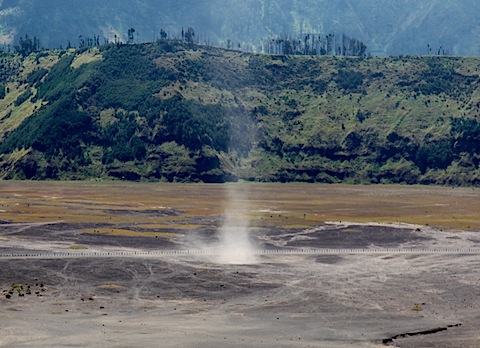 From the top of Bromo you can either turn around or walk along the volcano’s lip across to an adjacent peak and down. Either way, you have to get back to Indah’s for that 5:30 pm sunset

If you go to Bromo, I would advise you to book ahead. I would also strongly suggest avoiding what Wendy and I did. To help you, let me detail out for you itinerary;

For the love of god, book ahead and don’t stay at the homestay with paper thin walls on the main tourist road.

Wen and I are sitting in the whatever Indah hotel’s cafe after a day of walking in the crater; I’ve left my camera out. We’re sipping on few hot gingers (literally ginger root and steaming water) when I hear “nice camera, I use a similar one to take my photos.”

I glance up to see an Indonesian man talking to me, but he doesn’t look like the other Indonesians around here. He’s wearing a lot of high end outdoor gear; maybe a North Face or similar jacket and some trekking pants with solid looking boots. Actually too solid for the easy hiking around here.

“Let me show you some photos I’ve taken,” he says and pulls out a nicer-than-99%-of-the-other-phones-in-Indonesia Nokia and starts to show me some pictures.

The first one is of Krakatoa, except that it’s erupting at night and it’s a long exposure showing both lava flow and a lightning bolt striking the hillside. Bright red lava and a stream of white light gently fade into the silhouette of the volcano and the black night.

The next is a photo of an acidic lake taken at an impossible angle. As he assures me that “anything you leave in the lake is dissolved within an hour,” I can’t help but notice how the colours are popping off the screen.

He’s not trying to sell us anything, rather he wants to talk photos and Indonesia. Volcanoes to start.

Turns out he’s watched a lot of them erupt. So have some of his colleagues; he’s still alive, some of them aren’t.

He also knows every bloody volcano in Indonesia (no small feat in an archipelago of 120,000 islands). He had a contract with National Geographic for a few years. One year they wanted a volcano that was erupting near water with people fishing nearby. Doni thought about it and remembered a place he’d been back in ’88. He called up a friend there and it turned out an eruption was occurring; Nat Geo scrambled a crew.

But it’s not just volcanoes.

Want to see a Javan rhino? One-horned rhino? Sumatran Tiger? Elephant? Rafflesia? Doni’s seen and photographed them all; he can tell you where to go.

Maybe you want to understand Javanese history? The nuances and symbolism of Indonesia’s flag and emblem? Yup, Doni is there for you.

If it wasn’t for the fact that Doni’s got a very pregnant wife and two young sons, we might have just kept going on for hours. As it was, he had to go.

If you’re ever looking for interesting adventure in Indonesia, be sure to look Doni up and tell him Wen and I say hi.