After this, my third trip to Bangkok, I feel like I am finally getting a sense for the city. I’d like to think that it’s because I’ve experienced enough of the place that I am one with it; it’s more likely due to the fact that this time I travelled with a map. And Bangkok is one of those cities where you definitely need a map.

A few hundred years ago the royal family built a palace in an oxbow on the eastern bank of the Chao Praya river. Two arcing, narrow canals were soon built and they technically turned the oxbow into an island, although you could never tell that from the ground. 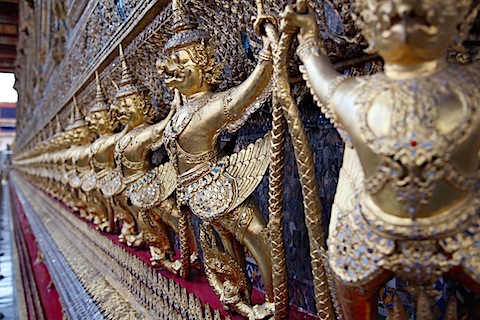 This is old Bangkok, the realm of the mandarin, minister, monk and monarch. The government offices are located here, as is the royal palace. The oldest, most spectacular temples are found here: the temple of dawn that is Wat Arun, the leaning buddha of Wat Pho, the towering lucky buddha and the Golden Mount. 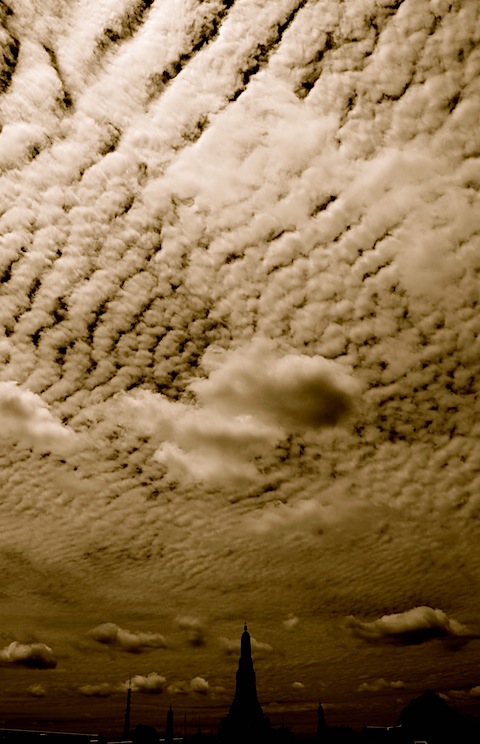 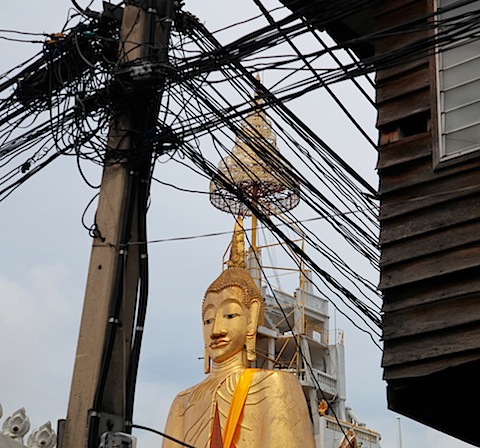 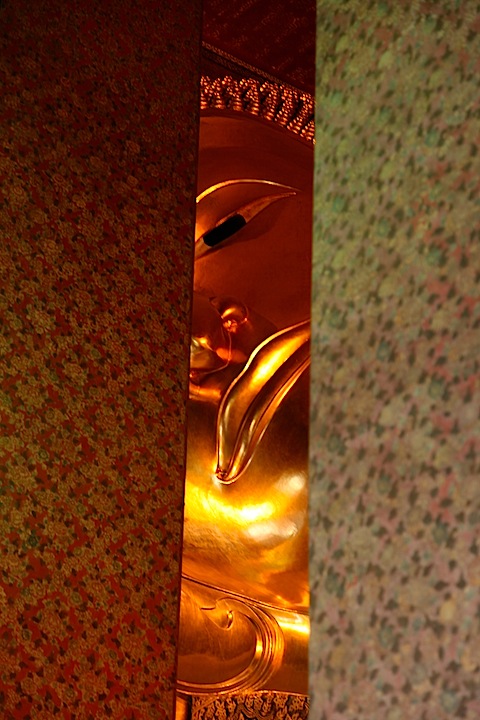 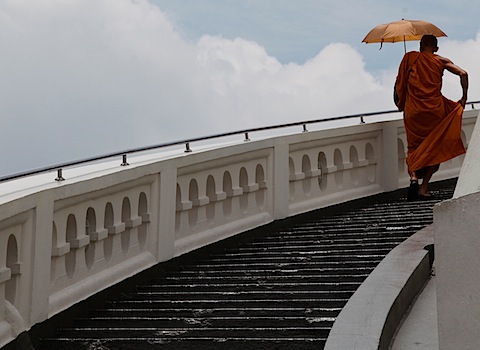 Backpacker scum wander Khao San road while outside the administrative districts it’s easy to get lost in the many alleyways. [This is particularly due to the curious nature of how Bangkok seems to name its streets: thanon are streets; soi are alleyways. Sometimes the soi have their own names; other times they are numbered but named based on the main road (sukhumvit soi 10 would be off thanon sukhumvit).]

On the western bank is the forgotten side of the city, a dormitory community. To the east of old Bangkok is another ancient neighborhood, Chinatown. Each street seems to be a collection of like shops all tangentially related to a nearby block. Sort of a car repair district gives way to a series of car tire shops gives way to shops selling industrial tires as tall as you kind of vibe.

As it grew, Bangkok became crowded and unlivable and the king built a set of new canals for commerce and a series of massive roads that radiate out easterly from old Bangkok. These canals no longer transport anything and instead their foul waters rot in the blinding sun (you always know when one is nearby). The roads have become the arteries of the city (their colourful taxis the blood cells?) and a massive infrastructure campaign means that skytrains and elevated highways live on top of roads beneath which crawls the subway. 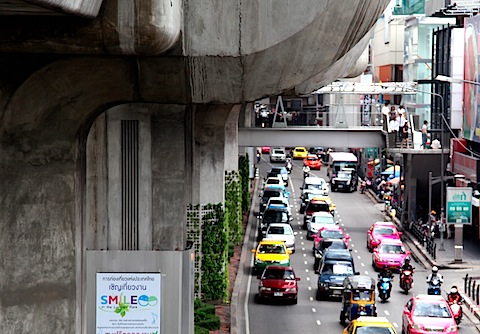 Skyscrapers have exploded around these nodes and if you could somehow place Bangkok on a balance, the entire eastern side would fall below the horizon as it is just so much more developed than the rest of the city. Moreover, more than half of these skyscrapers have been built in the past 10 years. When I visited the first time there were only a few and the partially finished concrete skeleton of the skytrain was a daily reminder of the long term effects of the 1997 currency crisis.

I need to be clear that only after this visit can I say that I finally have a good line on how the city is laid out. Because I sure picked the wrong area for our hotel.

On a rainy Friday night, getting from the skytrain to the hotel meant running a gauntlet of depravity and moral bankruptcy that would send a mormon screaming back to Utah.

From the Sala Daeng platform you can see dancers (hookers?) leaning out of a fifth floor window, smoking and depressingly waiting for work to being. At the bottom of the platform’s stairs you’re accosted to buy DVD that you can’t legally get anywhere; a man who speaks no English comes up to you and shoves into your face a laminated page that screams “pussy, pussy, pussy” and advertises an anatomically revolting girlie show.

Thanon Thaniya offers a brief respite. The street is lined with buildings where the bars are stacked six stories tall. The entrance to each property is lined with that bar’s girls, each of whom has too much makeup and long ago lost their original hair color. So that you don’t confuse them, each establishment requires the staff to wear a slightly different revealing outfit. Fortunately, their marks are Japanese men, so you can pass unfettered.

As you turn left on Thanon Surawong you’re back in it. Anonymous-looking forty-something Thai men walk up to you and ask “ping pong show?” or “live show?” despite having your wife by your side. When I firmly declined one tout, he had the nerve to ask me “why?”; another actually pulled on my arm and I had to resist the temptation to lay him out on the street (my most hated sensation: being touched by strangers).

In addition to the sex show touts, every shop front seems to be a restaurant, massage parlour or tailor. The proprietor of each is out front and emphatically offering their wares. Dodgy older white men sit drinking by themselves or slowly casting an eye at the young Thai men coming out of an alley of gay clubs. The other alleys are lined with a different type of massage parlour than the legit ones found on Surawong. On top of this, the sidewalk narrows as it’s covered by food carts and spillover stalls from the bustling nearby night market.

The funny thing is, this is not a bad neighbourhood. Some of the best hotels in town (like the Meridien) are here and our place was perfectly safe. There are also a couple of nice cafes (even a Starbucks) and the locals all walk around as though nothing is happening.

I’m going to go out on a limb and call Bangkok the new Tokyo. While very different cities, the similarity between the two is striking. Both cities are temples to massive infrastructure projects and dotted with skyscrapers that seem to be randomly placed to anyone who is not a local. People are incredibly polite and the subways are almost entirely silent; every square inch of space on them has also been turned into marketable space.

Both cities have wooden houses interspersed around them (Bangkok many more so since it was never firebombed; Bangkok’s are also remarkably close to skyscrapers). 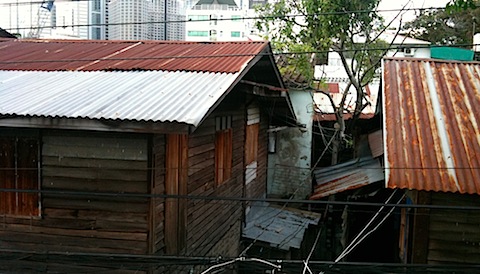 Both have a red light district (Kakbuki Cho and Patpong respectively) – and parts of Patpong look like v1.0 of Shinjuku transplants. 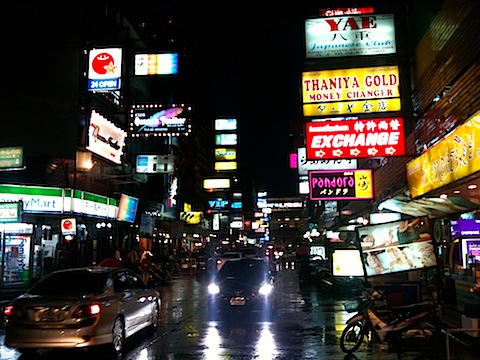 Tokyo has it’s famous Akhibara electronic district; in Bangkok’s Chinatown there’s an outdoor electronics market; on the weekend you can buy T1 cables and resistors in the streets. Each also worships the convenience store: 7 Eleven and Family Mart abound. (In fact, I think the best development index in Asia is the both the density of convenience stores and the range of goods offered; they are literally the street level beacons of progress here)

Of course, there are a lot of differences too. Thai society is too conservative to permit the chaos of Hirojuku to walk down its streets (although the ads here are a lot more provocative than when I first visited 10 years ago). And while both nations have monarchs, you won’t see pictures of the emperor plastered everywhere like pictures of the king in Bangkok.

And about those pictures of the king. The Thai love their regent and while he’s just a constitutional monarch, he holds strong sway over the populace. This is important because of Thailand’s recent political troubles. Since an army coup in 2006, the legislative branch just hasn’t been the same and two prime ministers have been booted from office: one for conflict of interest – he was also a tv personality – and one due to alleged electoral fraud. The ‘alleged’ in this ‘alleged electoral fraud’ is significant as it has led to the Red Shirt protests and now a grenade a week explodes here, armed soldiers guard both government buildings and the skytrain and you must pass a metal detector to get on the subway (where they also check for bombs before you can get on at the end of the line).

Trouble is, the king is ailing. And he’s got one son (plus three daughters) who most people think is a ponce (and just by writing this I’m breaking Thai law – that’s how revered the king is – and so I’ll be posting this from India) thus creating a succession issue at the worst possible time (and you thought Queen Elizabeth II had issues…).

The net result of this is that you now see photos of the queen everywhere. When I was last here in 2006 there wasn’t a single photo of her anywhere – just the king – and now you might think she’s the head of state. I’m going to call it right now: when he passes she’s going to claim the throne and try to change the hereditary rules to permit one of her daughters to be regent.

The Thais live in interesting times.

A few obligatory comments on the excellent food in Thailand.

a) Make sure to eat some of the ubiquitous street food: 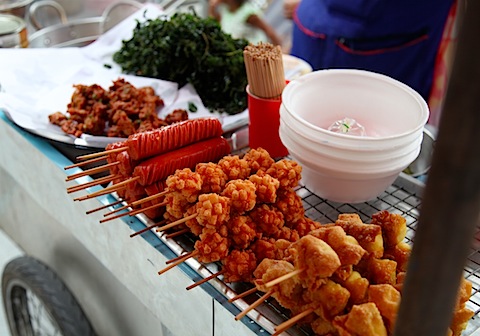 If you go to the Old Siam Market, you can browse many stalls that sell all types of great food like mieng khum (lemongrass, dried shrimp, peanut, ginger, deep-fried coconut, chili, shallots and sauce wrapped in wild betel leaves) and spiced sausage. Take it to the nearby park for a picnic: 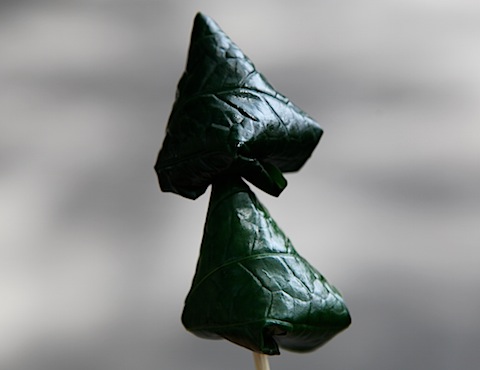 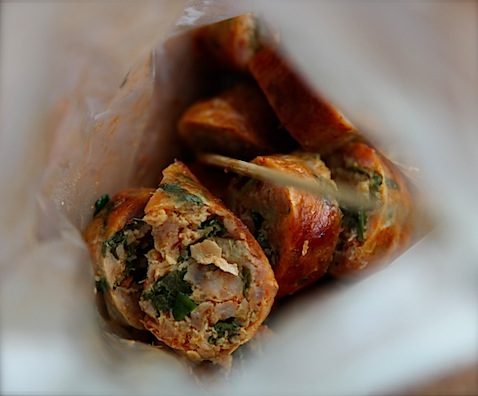 These guys also have the best massaman curry on the face of the planet (and I know that within a certain set those are fighting words).

c) The best Gaeng Ga Hree Gai curry ever – like a spicier version of a massaman curry – is found at Thanying.

Another city, another fruit I’ve never had before. If anyone knows what this is, please add a comment (I think it’s a langsart).

You pop the fruit out of the pod; it’s sweet and has a similar texture to a lychee but less consistency. There are about five slices to the fruit; one slice has a nut in it and the rest you can eat without consequence.

And to close, a random selection of Bangkok photos and an amateur movie! 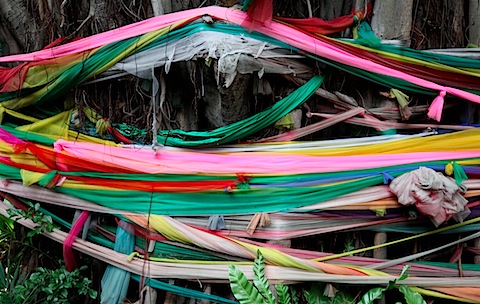 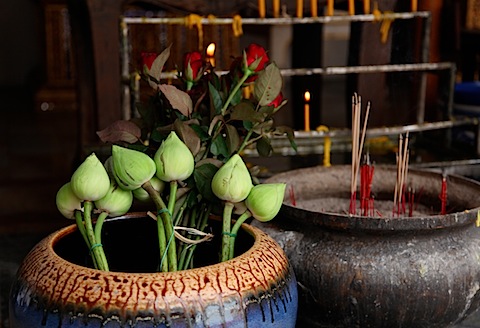 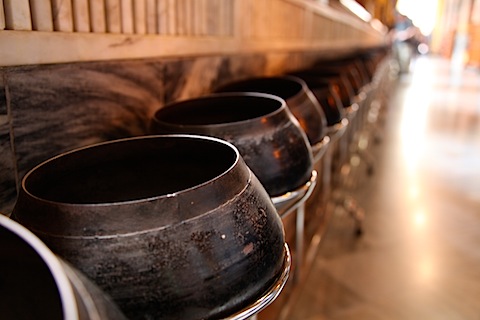 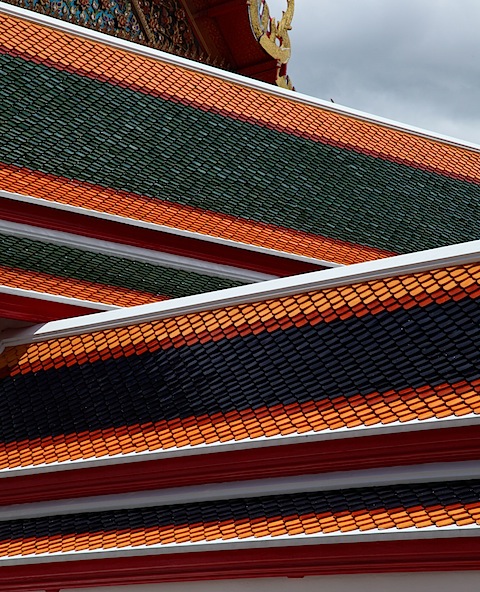