I’m 1,000 meters above the earth and falling at 5 meters per second. Actually, it’s not just me – Wendy’s there too, plus almost 20 unbathed French, German and Japanese tourists.

The funny thing is that I have no idea that we’re falling. We’re not accelerating so I can’t feel anything. Despite the fact that the air is in front of my face – no windows here – I can’t hear any rushing or anything. And the martian landscape we’re above gives no clues as to depth. Add in the fact that the balloons around us are both going up and down and I’d have no idea which direction we were moving if our pilot didn’t tell us. 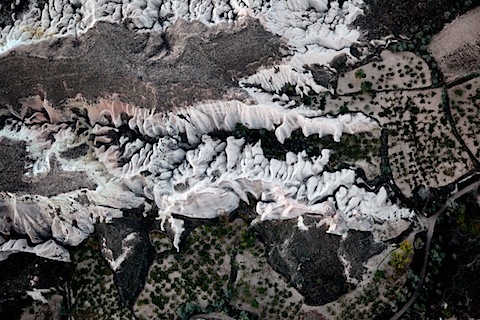 A balloon ride over Cappadocia is an essential means of seeing the landscape. Every morning almost a thousand people go up in 72 different balloons; it’s the largest collection of balloons found anywhere outside of balloon festivals.

You arrive early to watch them inflate in the pre-dawn twilight. 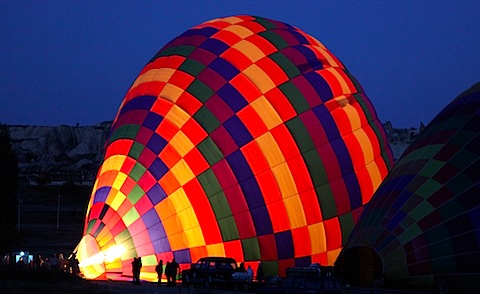 Depending on the whims of your pilot, you might then rocket to a few hundred meters and watch the other balloons rise. And I should add that you have no idea where you’re going to go; your course is set by the vagaries of that morning’s wind. 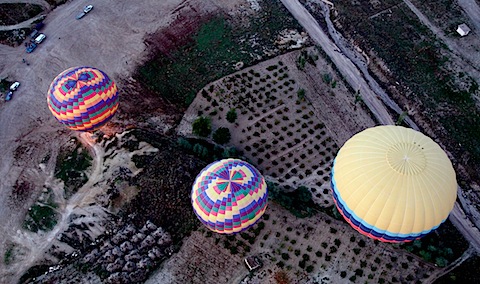 Our pilot then dropped down into one of the many ravines that dot the landscape. We all watched speechless as he glided over ledges and dropped down into canyons that contain thousand year old cave dwellings. We could have literally reached out and touched them or plucked walnuts from trees. You can get a sense of it about halfway through this video: 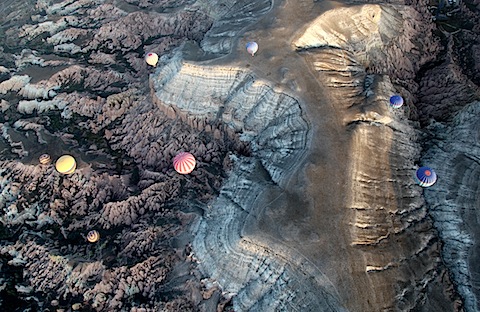 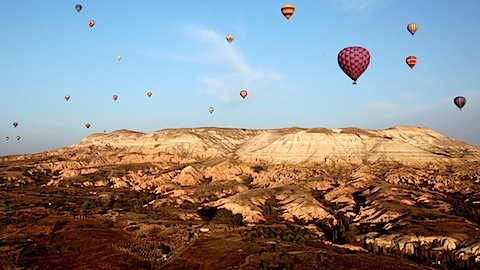 Landing is also an interesting time. Since nobody knows where you’re going to land, a fleet of chase vehicles are following you around as you fly. When you land, a trailer pulls up directly underneath you and the basket drops into place. Very professional.

A quick glass of sugary fermented grapes masquerading as champagne and you’re back to your hotel. And it’s not even 8:30 am yet.

In the distance, looming over all of Cappadocia, is the massive volcano that deposited all the rock and ash that makes the area so unique. Except that according to our guide – and one should never fully trust a guide in this touristy an area – there were actually three simultaneous volcanos that flooded the area with ash and lava millions of years ago.

I couldn’t help but wonder if there was a little bit of miscommunication here between geologists and the tourist industry. I mean, think about the word “simultaneous”. For type A people like me, it’s got a pretty clear meaning. At exactly the same moment (define it as the time taken for an atom to change state, a hummingbird’s wings to flag; whatever nano-scale small increment of time you want…), two or more identical things need to be happening.

Now imagine you’re a geologist. You spend your time wondering how a four billion year old rock evolved and most things take millions of years to occur. Unless your one of those adrenaline junkies who studies volcanos and earthquakes, it’s likely that in your entire career you’re going to see nothing happen. All the action has either occurred in the past or is set for the future. That continental drift ain’t fast enough for you to observe. On any given day, it’s the academic equivalent of watching paint dry.

So maybe, just maybe, when the geologists talk about “simultaneous” volcanos they really meant that three volcanos, only separated by a few hundred thousand years, formed the valley. I mean, they could be forgiven for getting carried away in the excitement of a few things happening in less than a few million years and calling it “simultaneous”. In the grand scheme of four billion years of volcanos blowing apart and reforming the earth, that’s a pretty inconsequential error.

But I digress; it’s just one thought that ran through my head as we were in the bus riding from site to site.

And there’s a lot to see in Cappadocia.

Let’s start with those thousands of Star Wars-style (despite any protestations by your guides, none of it was filmed in Turkey) rock-carved dwellings that are ubiquitous. Some have even been converted into hotels: 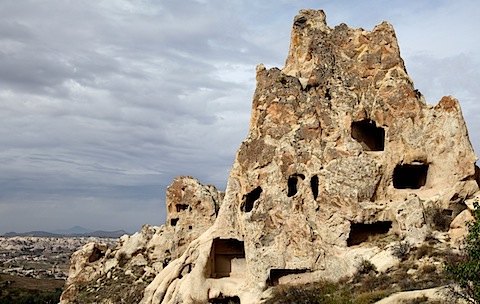 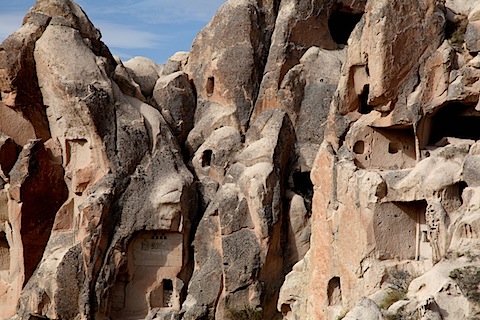 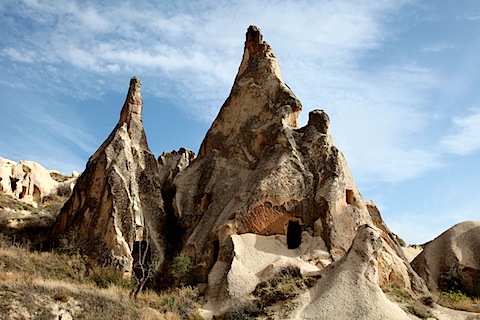 These were built by early Christians; when anyone invaded, they would rush underground to various cities they had built. The area is literally pocked with multi-layered underground cities. At Derinkuyu you can go eight floors undergound and explore countless booby traps. Interestingly, no one knows how they disposed of their bodily wastes…

There are also vast crumbling castles. The ruins of Cavusin were used from the 9th century until the Ottomans. Erosion gradually pulled down the mountain’s facade and revealed all the dwellings there: 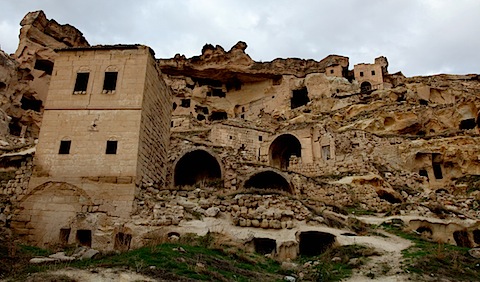 And the similarly ruined castle of Uchisar looks like a failed cross between Mont St. Michel and Kowloon Walled City: 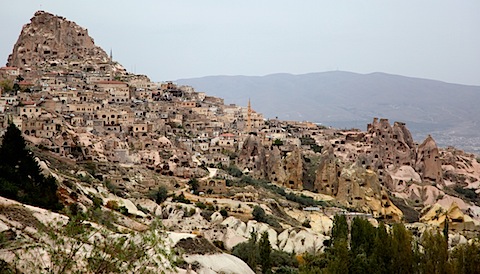 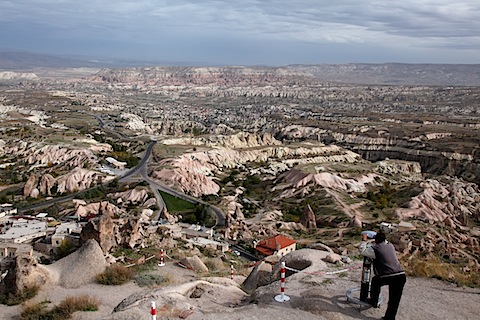 …and the view from the neighbouring Cafe at Argos is one of the best views you’ll ever find in a cafe (if I could afford it, I’d stay at the associated Argos In; mindblowing place). 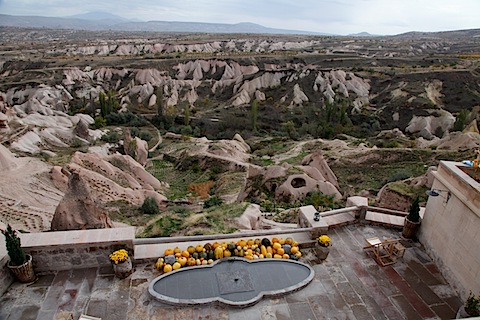 The region also abounds with numerous stream-filled canyons, almost all of which can be hiked. It’s fun to descend from the dusty plains into the tree-lined bottoms. At some points you actually have to hike narrowly through ancient hacked-out caves or water-eroded tunnels. Also, beware that nothing is marked clearly; you occasionally come to cliffs and have to backtrack: 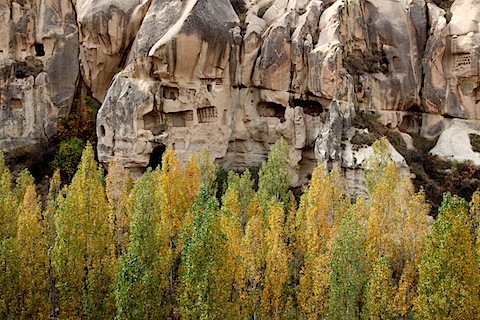 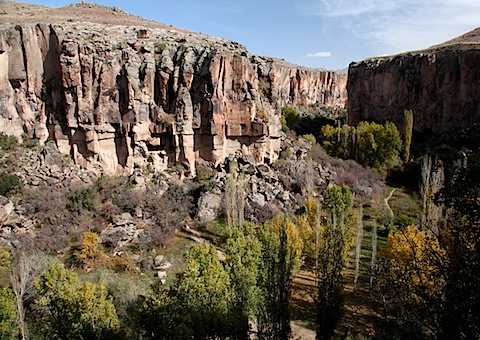 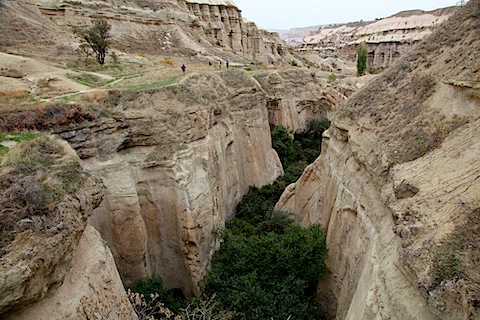 Finally, since Cappadocia was once covered in water and composed of different layers of sediment, the rocks have eroded at different rates and left some pretty incredible – and almost unbelievable – shapes behind: 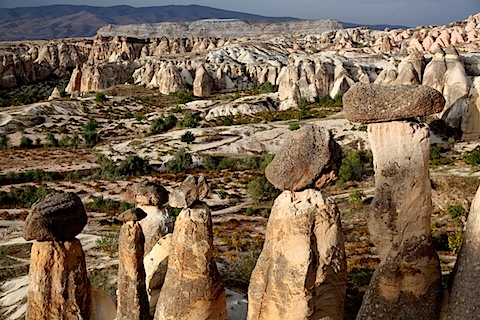 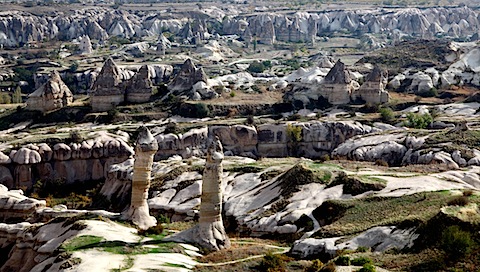 Those early settlers were mostly Christians who excelled at creating churches. There are hundreds of them; when some of them break, the Turkish authorities don’t even bother to fix them or seal them from the elements: 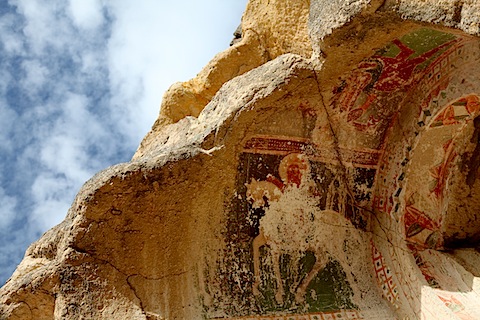 The earliest recorded cave paintings come from the 9th century and are fairly simple: 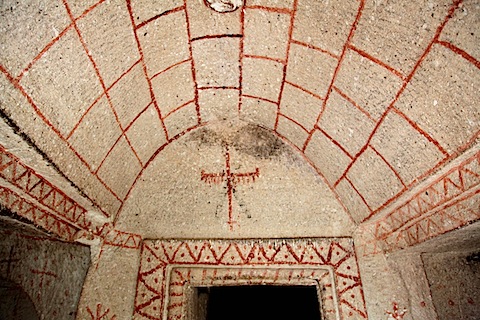 However, over the next two centuries they got increasingly sophisticated: 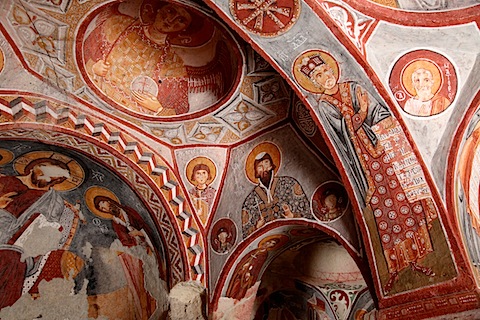 When the Muslims came, they began a process of gradual assimilation and slowly exercised their power over the locals. Since Muslims aren’t allowed to worships idols, Christians weren’t allowed to paint eyes on their saints: 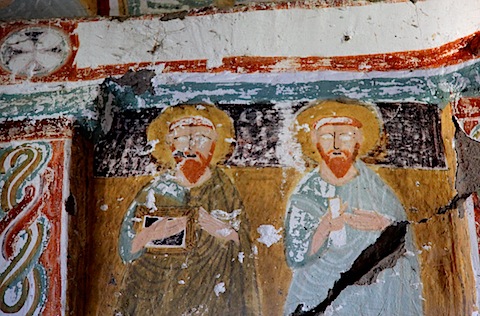 What did these people do to survive? Farming was pretty common – and you can see it pretty much unaltered from how it was likely practiced then (the following photo is actually an orchard amongst many dwellings and rocks): 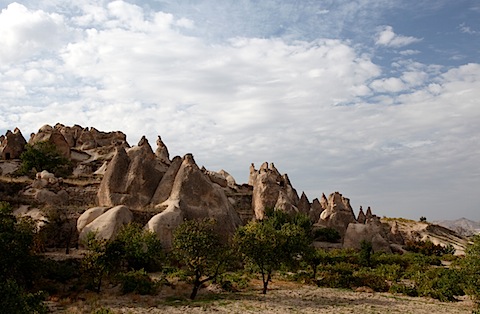 But the real money was in dovecotes. This is a polite way of saying that the locals earned their keep by collecting bird shit. They would create caves that contained numerous alcoves for pigeons and then brick them in: 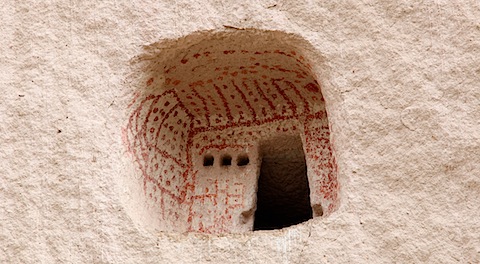 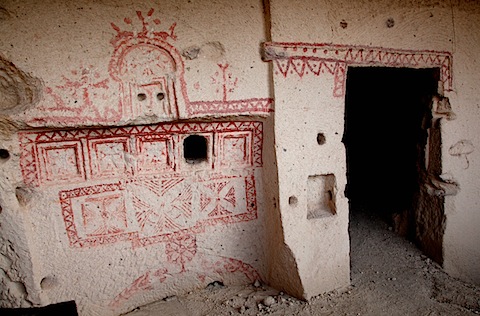 The red paint apparently attracted the pigeons; once a year they would go in and collect all the guano. Erosion gives the casual tourist a sense of what the alcoves looked like: 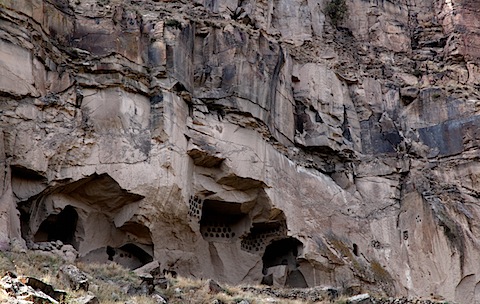 Nowadays it is all tourism, all the time. In fact, the main city – Goreme – is literally built out of the old dwellings (as are Uchasir and Cavusin): 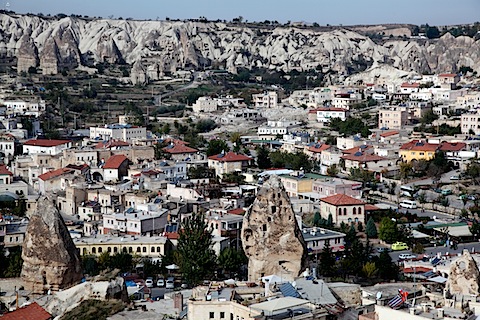 If you look at all the photos above, you may noticed the complete and utter absence of horses. This would be of no consequence, except that, curiously, “Cappadocia” means “land of beautiful horses”.

If you go on a group tour of the many sites, remember this, as eventually you will be taken to a jeweler to watch onyx be carved (as a prelude to shopping!). This trinket will then be offered to the first person who can recite the meaning of Cappadocia.

Also make sure to remember that speed is more than accuracy here as your judge is not a native English speaker. If you, as I did, should yell “land of many horses” or something similar you’re likely to win. And then you, like me, will be the proud owner of an improperly finished paperweight.

If one of you kind readers gets it for Christmas, please enjoy your handmade souvenir, created by a Turkish master who has spent his life – just as his father and grandfather – perfecting the art of turning raw rock into emotion. I’m sure you’ll love it.

Cappadocia is a fantastic place and here are a couple more photos to close: 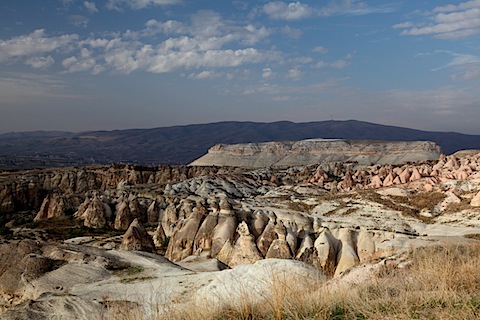 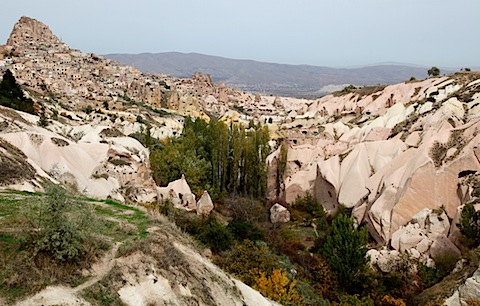 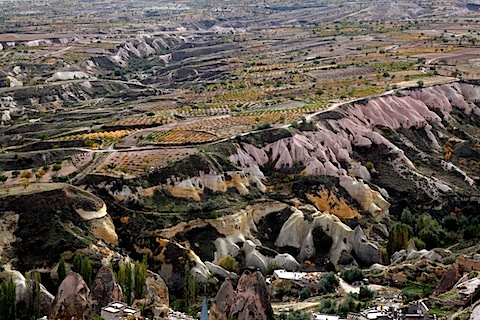 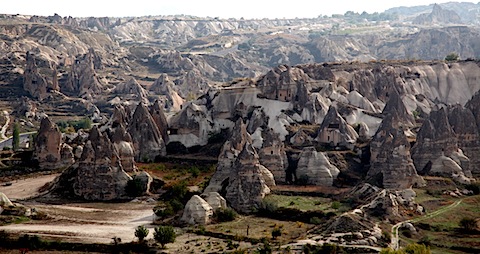