Vancouver has an awesome food scene: great chefs, great restaurants and great food shops. Since we’ve arrived here, Wen and I have wanted to check out the stores that exist beyond the downtown/Granville/Kits core. On Satruday we finally got the chance, with a long walk from our place through East Van.

Here’s my attempt to take you on the ride.

The first place we went – and yes, I know that it’s not technically in East Van – was Benny’s Market. Benny’s has been around since 1917 and is worth a visit. At first glance, you might be dismayed: from outside it looks like a neighbourhood bodega, not a temple of Italian food. But when you go inside and venture into the bowels of the store you’ll find their broad selection of Italian delicacies: coffee, pasta, antipastos, meat, etc. 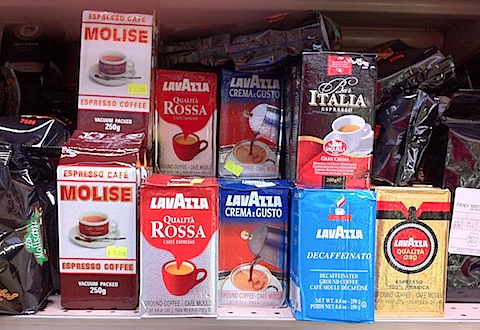 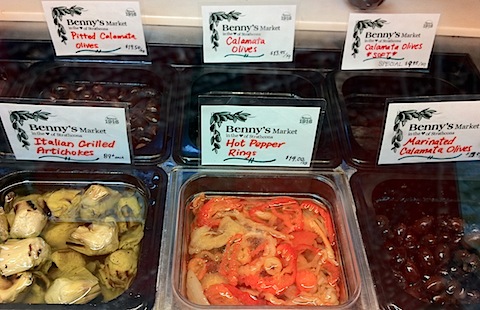 We left with a bag laden with pasta (including the elusive lazy man’s gourmet meal: Ripienissimi stuffed pasta), sauces and pancetta. The orecchiette ended up becoming our dinner: 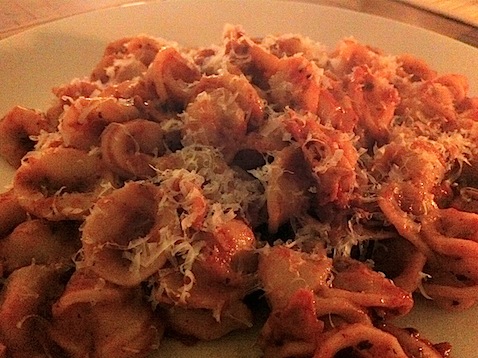 We weren’t hungry enough for a sandwich, but we’ll be going back; they’ve been making sandwiches there since 1917.

Next stop was the East Van outlet of Les Amis du Fromage. Walking inside, we fell in love with the deep, competing smells of the different cheeses. We were tempted by the goat cheese below, but we settled on an Austrian Karotten Kase instead (it’s a hard orange cheese; hence “Karotten”).

They were sampling rose, orange and lemon-flavoured olive oils; if you ever stumble across these, be sure to try them. You wouldn’t want them every day, but they’re delicious.

We’re also going to have to go back to their wine bar, Au Petit Chavignol, which is right next door (one of the few places in Vancouver where you can get raclette). 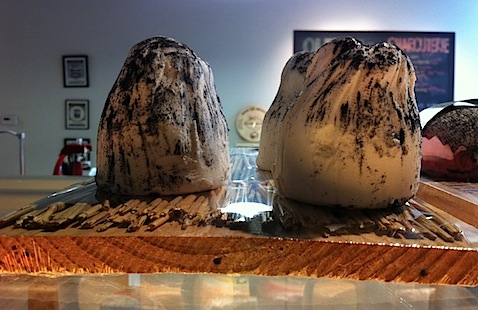 At this point in began to rain and we did what any self-respecting Vancouverite would do: we went for coffee. Our chosen stop was Latin Organics. This tiny little cafe really is a ray of sunshine on a cloudy day: it’s all white walls with orange highlights and the most tasteful use of bamboo I’ve ever seen.

The spirit of the store is Colombian, so I had a coffee con leche and a corn arepa; Wendy had a delicious London Fog (Earl Grey tea, shot of vanilla and steamed milk). 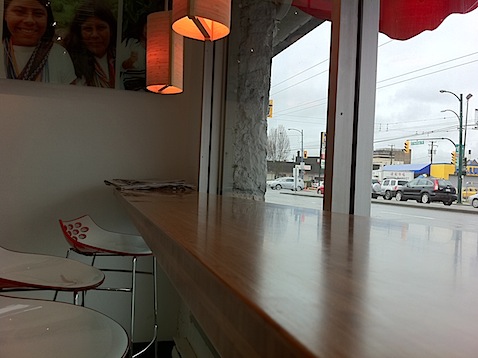 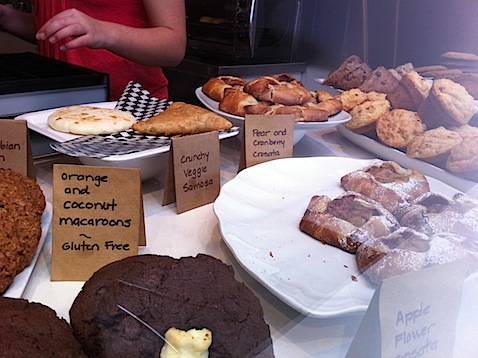 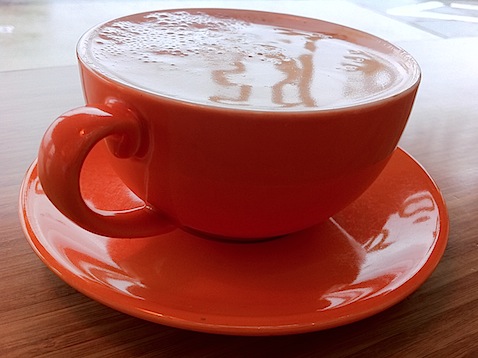 Latin Organics is right next to the Gourmet Warehouse, which lives up to its name and stocks everything you could ever need to cook anything. Looking for 15 variants of cast iron griddles? Your choice of 80 different cooking knives? The Vosges bacon chocolate bar? Duck? It’s all there.

If you were to look at these last few stops, you’d notice that they’re all on East Hastings. This is the same one that’s home to the poorest postal code in Canada just a few kilometres away; oddly it’s a food paradise if you keep following it and know where to look.

In fact, our next stop was also on it: the East Village Bakery. We were tempted by their cheddar fougasses, but they were way too big to carry with us on our tour; we opted for a cheddar and kalamata olive loaf instead. 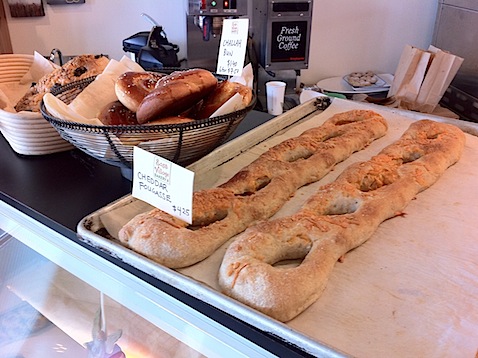 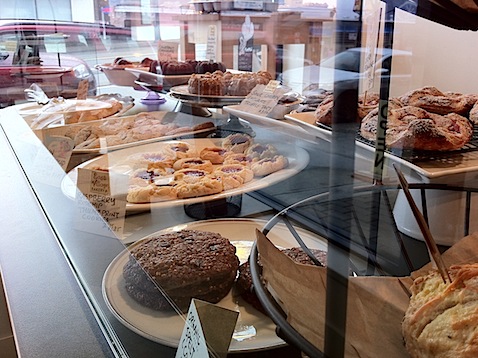 Our last stop on East Hastings was Moccia. I had been hankering to go here for a while: many of Gastown’s restaurants and many of the food stores we’d already visited sell Moccia’s meats.

When you step in the spare interior of the store, you notice immediately that they take their meat seriously. The stamps behind the butcher’s stand are a solid clue:

It was really tough to choose from amongst the many types of sausages, bacon and various cuts; we settled on some porchetta and breakfast sausages. 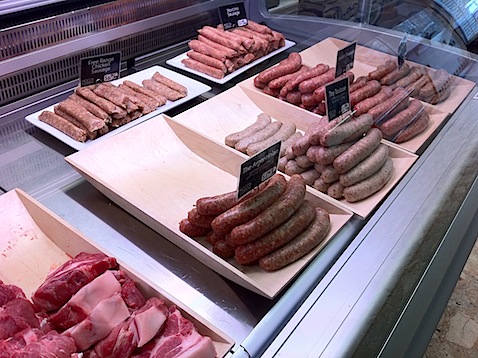 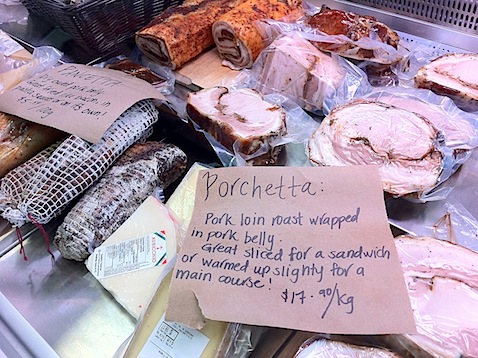 Thus ended the East Hastings portion of our tour. We backtracked a bit and went up Victoria Drive to the South China Seas Trading Co’s store.

This store might just pack the most cooking punch per square foot anywhere in the world. In the tiny store you can get an incredible array of spices sourced from over 10 global suppliers. We picked up some szechwan peppercorns; I’ve never seen them for sale anywhere else. They also were selling kasuri methi (dried Fenugreek), which I’ve never seen outside of India.

Incredibly, not only is this a store, it’s also a cooking lab; I’ll likely be coming back in April to learn how to make four types of noodles. 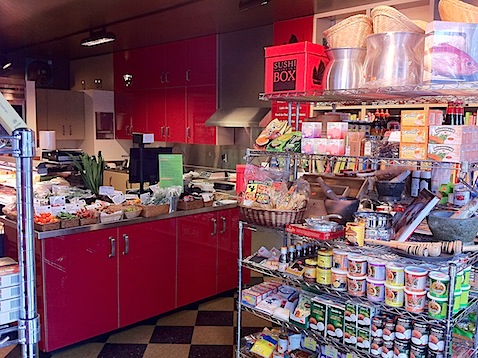 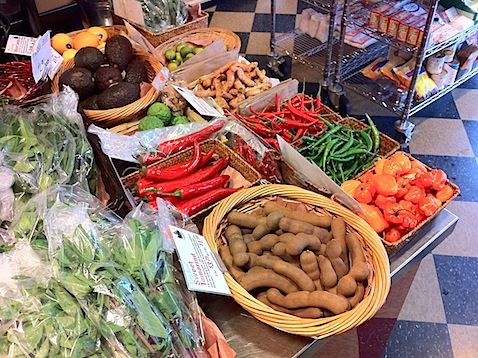 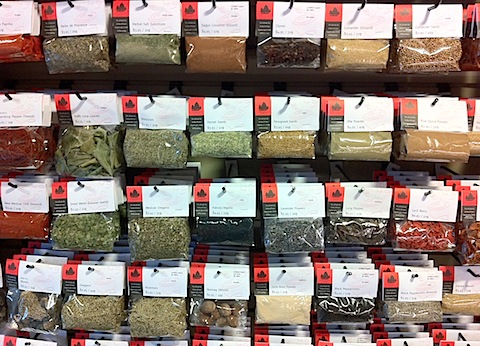 This was followed by a walk over to The Drive and a trifecta of Italian stores in quick succession.

First, JN&Z Deli. Meat lovers heaven; I couldn’t count all the hocks hung high from the ceiling; one of the most beautiful-smelling places on earth. 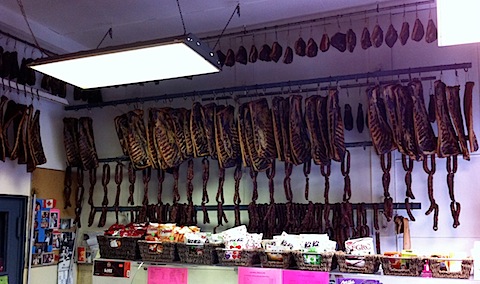 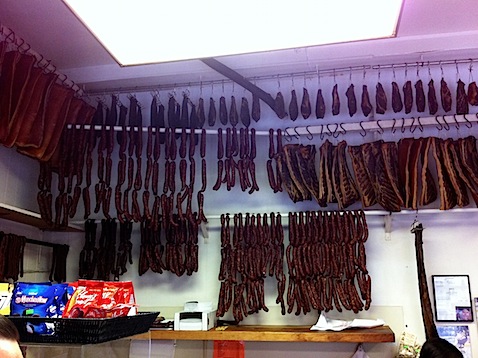 A hundred feet or so away was La Grotto Del Formaggio, where the sky-theme ceilings stare down on all things Italian: not just cheese. Much like Benny’s, we’ll be going back for a sandwich sometime. 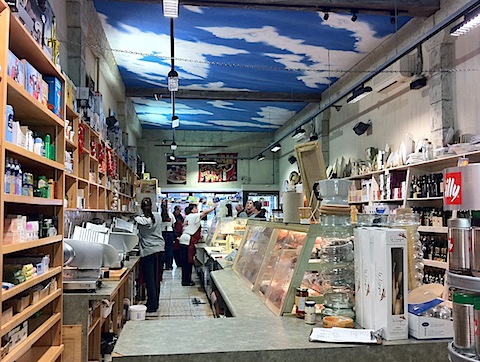 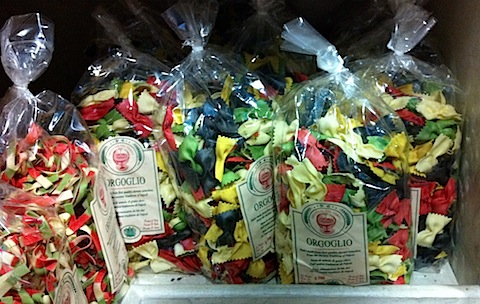 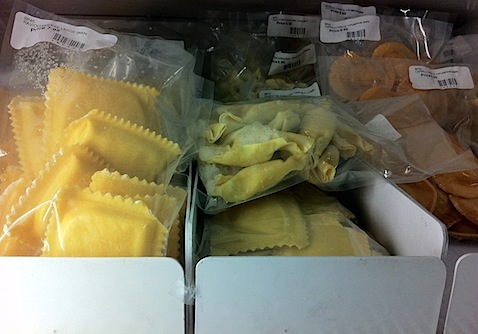 Right next door is the Fratelli Bakery, where you can get your cannoli on. 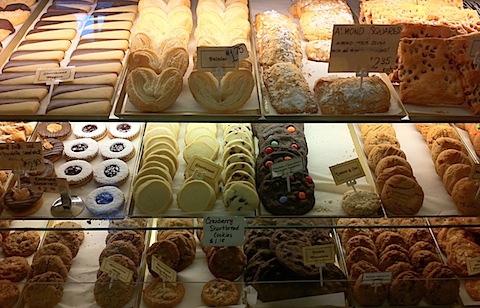 By this point we were bushed, so we headed over to Prado for another coffee injection.

This place is one of Vancouver’s cutest cafes: lots of light, brushed aluminum navy chairs, whitewashed walls, wooden floor and – rare for Vancouver – brick. And the coffee’s great too. 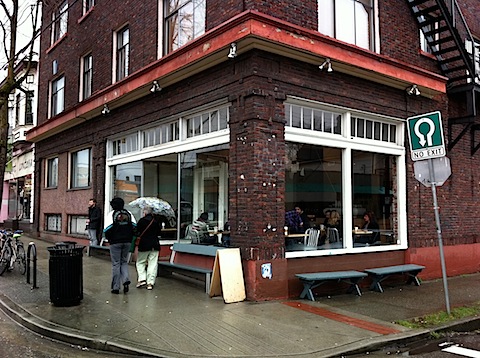 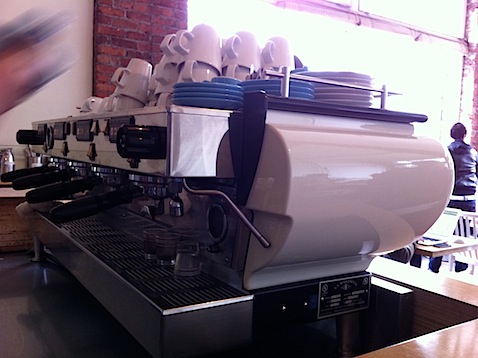 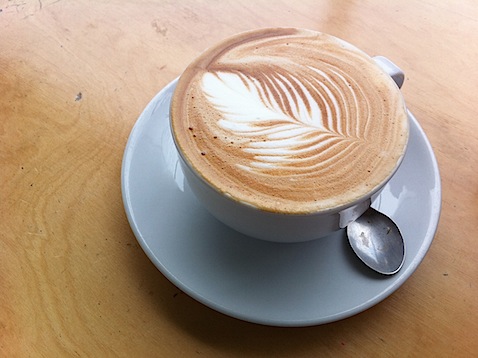 It was a great day. Here’s what the haul looked like; call me if you want to eat well this week: 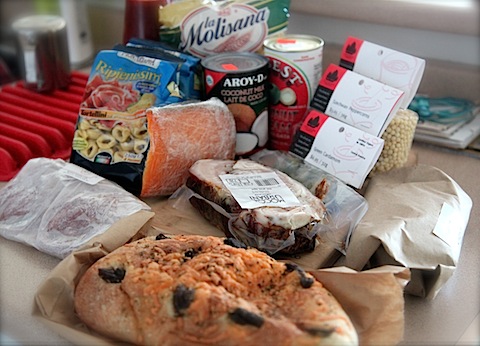