A weekend visit to the Vancouver Art Gallery has got me crushing on Jim Campbell and his LED art.

All of his works are a trompe l’oeil of sorts; he uses blinking LEDs to create the illusion of motion. If you stare at one LED it appears to blink chaotically; it’s only in the context of all the other LEDs that a pattern – and the art – emerges.

Take for instance, this piece: 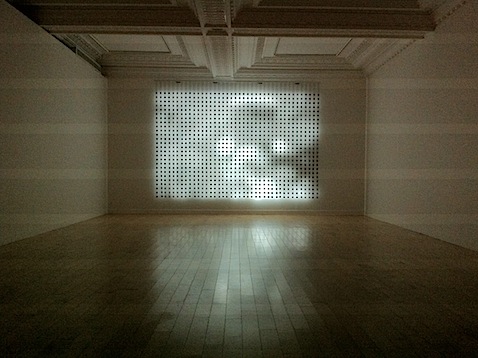 You sit at the end of a long room and watch what appears to be a grainy, black and white movie projected on the wall.

Except that there’s no projector. You can stand right in front of the moving image and you won’t block it because it’s created by a mesh of LEDs hanging in front of the screen wall. 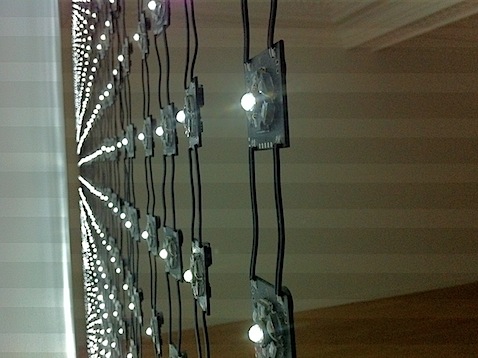 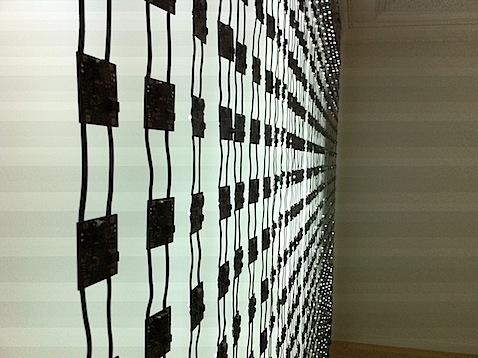 Moreover, in the first image it looks like there’s a grid hanging in front of the wall, but you’re only noticing that because this is a static photo. When seen as a video, the effect of motion created by the lights makes you ignore the grid.

Here’s a video of another piece.

These are people walking through Grand Central Station. The glass contains one over-exposed image of people walking; an LED screen behind the glass projects the outlines of people. Occasionally the pictures and shadows line up, making you see the piece from a new perspective.