Last night I sat on my deck and watched one of the most incredible sights of my life unfold.

The slowly setting sun painted the city’s skyline in gold and orange. The city was silhouetted against an opal blue sky and mountains tipped with the last vestiges of a long winter. Crows cawed as they grouped for their nightly flight east; the sound was balanced by the gentle rush of white noise from the waterfall in our building’s amenity garden.

Convoys of angry police vehicles streamed across the Burrard Bridge as the smoke from various fires hung over the downtown core. Police helicopters circled overhead and occasionally one of their search lights would cut through the smoke like a laser.

On television pundits kept wringing their hands and rhetorically asking “how could this happen here?” while appearing genuinely stunned.

It was an oddly mesmerizing experience and one that I hope to never see in Vancouver again. Except that I’m pretty sure I will – and it won’t take another playoff run to make it happen.

Riots are funny things. A riot itself is a complex system with hundreds or thousands of actors involved; predicting when a riot is going to occur is remarkably difficult. You need a group of people (100,000 people watching a hockey game ought to do). Alcohol as an accelerant helps. But more than that, you need a reason for people to riot.

And what reason could people in Vancouver have for rioting?

After all, if you ask anyone in Vancouver if they like the city, they’ll tell you it’s the most awesome place on earth. The mountains. The beaches. A forest in the city. An incredible food scene and some of the best coffee in the world. Hell, it’s got everything but sarcasm.

But it’s also got one problem: if you’re a young person in Vancouver, you may not live a life that’s as good as your parents.

Before you tell me that I’m on crack and run me out of the city, some numbers.

Let’s do something any self-respecting Vancouverite would never do, and compare the city with Toronto.

According to Statscan, in 2006 there were about 2.1 million people in the Vancouver metro area and 5.1 million in the Toronto metro area.

If you were a full-time worker in Vancouver you took home almost exactly $54K versus almost $61K in Toronto.

Toronto’s driven by its wealth of small to large manufacturers and the fact that it’s home to all of Canada’s major banks. Vancouver is much more tied to tourism, real estate and government services.

Why is this important? Well, people in Vancouver don’t only make less money, there’s less potential to make money.

In a city like Toronto where there are lots of companies, you get new types of jobs that just can’t exist in Vancouver. Want to work for a product design company? Investment banker? Insert your high-end, niche business of choice: they can only exist when you’ve lots of head offices.

Anecdotally, this is why if you’re a business person who works in Vancouver, your non-Vancouver friends always ask you “what do people do there?” and “why are there no jobs?” Statistically, about 1% more of people in Toronto’s workforce are considered to be “senior or specialist managers”.

Jobs in a hotel, on a construction site or in a school or hospital are great jobs, but they don’t offer you the same potential as other ones.

Those “Toronto jobs” are more meritocratic. If you’re really good at what you do, you have a chance to be disproportionately rewarded for what you do versus everyone else. You have opportunity; the downside is that it’s a highly competitive world.

If you’re a teacher or a nurse, your pay is fiercely regulated and no matter how good you are, you simply won’t earn beyond a certain amount. (However, your job security is nice and high)

All this talk of income is a little crass, so let’s look at the yin to income’s yang: cost of living – and in Vancouver it’s currently out of control.

Check out this chart from Canadian Housing Price Charts: 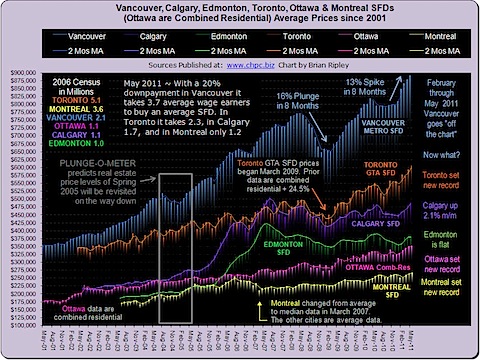 Look at Vancouver! We’re number one!

As you can see, housing prices are at an insane level – up almost 50% in a little over two years with a gap that’s widening vs. the rest of the country. Moreover, this trend holds across the city. The national papers are full of stories about Chinese buyers frothily overbidding on places in the West side of town, but prices are crazy everywhere. If you want to move out past Commercial Drive (a beautiful neighbourhood, but a long drive to the beach), you’re still looking at $800K for a two bedroom free-standing house.

We’re likely in a bubble, but who knows when it will end and that’s little comfort to the people who actually live here.

Housing prices are important because they’re the single biggest purchase most people will make and they’re key to what has always been a part of the Canadian experience: work hard, save money and buy a house to raise your family.

In Vancouver, this is breaking down.

If you’re a young person considering a career as a nurse or construction worker or teacher or hotel clerk you can pretty easily predict where your income’s going. And you can see that it’s going to be near impossible to live in Vancouver with anything close to the standard you thought you would.

You’re watching part of your life slip away.

The life you took for granted growing up.

The life you were always told you would have.

And that’s what takes us back to the corner of Georgia and Hamilton and a few fans starting to burn a car.

The widening affordability gap in Vancouver is not an excuse for a riot (For the record: I think every rioter should be prosecuted to the full extent of the law. I applaud efforts like Identify Rioters) but it helps to explain why the riot started in the first place.

There’s a constant tension in Vancouver: it’s the fact that this is turning into a city that’s only affordable for the very rich. You feel this tension when college-educated people talk about being unable to buy a home. You feel it in the constant conversations people have about the price of things (a disproportionate share of time in Vancouver is spent talking about money; eavesdrop and you’ll see). And you feel it when condos open in the middle of nowhere and start at north of $300K for just over 600 square feet.

This tension in the system seeks a release and yesterday’s loss to the Canucks afforded it a chance. I suspect that’s part of the reason why there was so much looting in this riot vs. the one in ’94.

I’ve seen this before, too. When I was in France in 2006 there were massive riots by youth against the government over their future. There are parallels between that one and Vancouver yesterday. 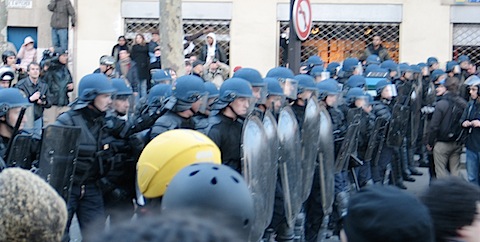 Hopefully, the city will consider this when they try and figure out how to prevent future riots. This is not simply going to be a matter of dispersing crowds and cracking down on alcohol consumption, rather it’s going to involve Vancouver thinking about what type of city it really wants to be – for all Vancouverites – and making that come true.