A few years ago, Alan Weisman wrote a little book called The World Without Us . In it, he detailed what would happen to the the earth if humans suddenly disappeared. There’s a captivating chapter where he describes the decay of Manhattan as it’s buildings begin to collapse:

In the first few years with no heat, pipes will burst all over town, the freeze-thaw cycle moves indoors, and things stat to seriously deteriorate. Buildings groan as their innards expand and contract; joints between walls and rooflines separate. Where they do, ryan leaks in, bolts rust, and facing pops off, exposing insulation. If the city hasn’t burned yet, it will now. Collectively, New YOrk architecture isn’t as combustible as, say, San Francisco’s incendiary rows of clapboard Victorians. But with no firemen to answer the call, a dry-lightning strike that ignites a decade of dead branches in Central Park will spread flames through the streets. Within two decades, lighting rods have begun to rust and snap, and roof fires leap among buildings, entering panelled offices filled with paper fuel. Gas lines ignite with a rush of flames that blows out windows. Rain and snow blow in, and soon even poured concrete floors are freezing, thawing, starting to buckle. Burnt insulation and charred wood add nutrients to Manhattan’s growing soil cap. Native Virginia creeper and poison ivy claw at walls covered with lichens, which thrive in the absence of air pollution. Red-tailed hawks and peregrine falcons nest in increasingly skeletal high-rise structures.

By definition, none of us will ever get to see this (after all, it’s the world without us…), but every winter in Vancouver a miniature version of this plays out: 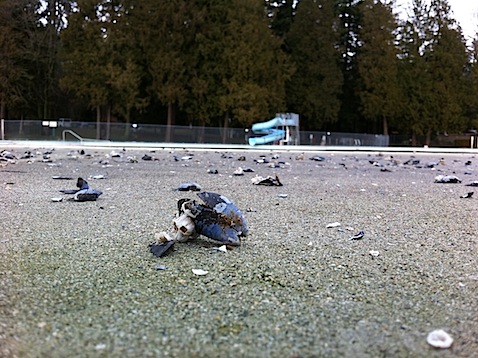 Stanley Park has a massive pool in it but it’s shuttered for the winter; literally no one enters it between September and May. The ever-resourceful crows recognize this and use the concrete surface as an oyster-opener. They drop the shells from on high then swoop down after they crack on impact. Since no one’s going in the there to clean it up, the shells collect over the winter.