A popular trope in modern fiction is the dystopic tower: a skyscraper that becomes its own self-government and slips into chaos. The building-a symbol of the future-becomes a trap for all those living in it and a blight on civilization.

JG Ballard wrote one the seminal book with High Rise. The last two years have each seen a movie where a high rise is controlled by drug lords who terrorize the inhabitants and live above the law.

Next year it was Dredd :

From one side the building appears finished; all glass and steel. From the other, it’s a vertical shanty town, with concrete favelas stacked on top of each other. 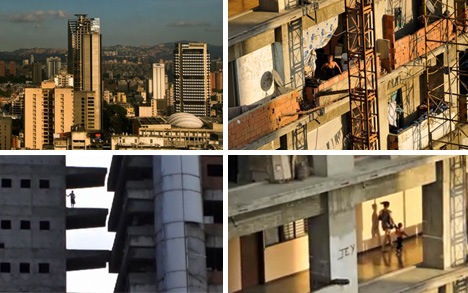 The text paints a vivid image of life inside the slum:

The halls were angled to admit light from the wall-to-wall windows at the end of the building, but they were still dim. On the unfinished floors, people had built small homes out of painted cinder block and plaster. Many kept their doors open, for better air flow as much as for sociability, and I could see them busy with everyday life: cooking, cleaning, carrying pails of water, taking showers. Music played here and there. Daza [the guy who organized the squat and runs the building] had rigged up a generator-powered water pump and each floor had a tank, but the water supply ran unpredictably through pipes and rubber hoses.

The Tower has several bodegas, a hair salon, and a couple of ad-hoc day-care centres. On the ninth floor, I visited a small bodega, where Zaida Gomez, a white-haired, garrulous woman in her sixties, lived with her mother, who was ninety-four. She showed me the cubicle next to the shop, where she had settled her mother, a tiny birdlike woman who slept on a bed right next to one of the plate glass windows. Gomez kept a fan going all the time, because the window made the room baking hot.

Gomez was one of early pioneers of the Tower, and she told me that, at the beginning, things had been terrible there. The Tower had been ruled by malandros [property invading gangsters], she said, shaking her head; there had been beatings, shootings, killings. But now she was able to leave the door of her shop open, something she had never been able to do in Petare, the slum where she had lived before. Her shop sold everything from soap to soda pop and vegetables, and to bring in supplies she made the journey up and down nine floors several times a day. It was tiring, she said, but she couldn’t afford to pay the mototaxis [the first 10 floors include a parking garage and you can get a ride to the top on a motorcyle], who charged fifteen bolivares (about eighty cents) for each ride. She had a daughter who helped her, and a grandson.

The article is worth reading in its entirety as it contains several almost unbelievable stories about how surreal life is in Chavez’s Venezuela.