I had a new experience: I drove an all-electric car. I come from a yuppified, Prius-driving household, but I’d never actually driven a purely electric car-and I thought I’d share a couple on notes. 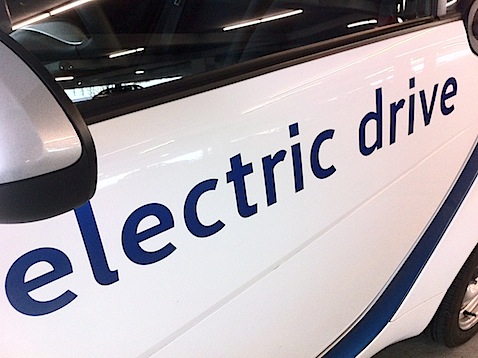 The first thing I noticed was that I couldn’t initially tell that the car was on. Normally when I’m in a Smart Car I turn the key, the engine roars (okay, it’s more like the sputter of a lawn mower…) to life and that’s my instruction to release the key so I don’t destroy the starter engine.

There’s no such sound with an electric engine. If you’re me, you just sit there turning the key coming to the slow realization that something’s happened, and then you noticed the dial: 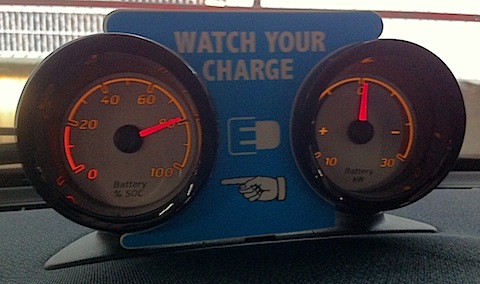 That’s the only signal you’ll get that the car is actually on.

When you start moving, it’s just the sound of the tires on the road and the occasional high-pitched whine of the engine when you press the accelerator (which really should be called something else because there is barely any pickup).

I did notice one really weird thing while driving: the car is by default in neutral if the accelerator isn’t depressed.

I’m one of those people who releases the brake just before the light starts so that I can get the car in motion and then accelerate smoothly. However, when I released the brake on this car, I found myself slowly rolling backwards. Rather than being in first gear, the car was in neutral; this meant that I had to keep constantly pressing the accelerator to keep it moving.

Neat experience and a lot of fun; hopefully I’ll get a chance to try another one soon.