I just finished Ryan Boudinot’s Blueprints of the Afterlife. It’s one of the most original and convoluted stories I’ve read in recent years; like David Mitchell meets William Gibson.

There are some beautiful sentences lurking in this story:

Like a rivulet of suffering feeding into the tributary, this new source of sad humanity bled from the TV…

The end was a slow but accumulating tabulation of lost things. We lost species of animals, polar ice, a building here and there, whole cities. There was a time when we lived on streets where we knew our neighbor’s names but now we were all strangers isolated in our condos late at night, speaking across distances to our lonely, electronic communities.

The book also features the most interesting architectural reinterpretation of the future I’ve read in recent years. Here’s how Victoria, BC looks a few hundred years from now:

The city of Victoria appeared to have regressed in age, its green-built skyscrapers brought to heel, malls and parking garages and condominiums razed, all replaced by roiling wilds. What remained standing were the buildings worthy of the city’s heritage-the Parliament, some Tudor-style B&B’s, a replica of Shakespeare’s house. This was a city that had once aspired to London’s botanical gardens and double-decker buses but had negotiated with the tribal culture that preceded it, arriving at an aesthetic truce, a fusion of potlatch and high tea. Here and there totem poles and longhouse materialized from the Emily Carr mists rolling off the harbour, monuments of extinction far more distant than the end times of recent memory.
Abby disembarked, suitcase in one hand, a duffel containing her tools in the other. Up ahead was the Empress Hotel, a stately, ivy-clad structure that smugly lorded over the geography as is glaciers had sculpted the harbour for its benefit alone. It used to be a hotel anyway. In recent centuries it had survived fires, vandalism, drug-addicted architects who’d added wings and bunkers. A scorched tower stood proudly unbowed. Abby ascended to the lobby entrance, skipping every other step.

But the most interesting idea in the book is New York Alki.

The book is set in the Pacific Northwest, primarily around Seattle. Now it turns out that Seattle was originally called “New York Alki“. Alki was a local native work for “by and by” and several of the original settlers were from New York. One day, by and by, Seattle would be New York.

It hasn’t exactly worked out that way, but Blueprints shows how it could.

I couldn’t help but wonder what this would look like, so I thought I’d create a map showing it. Here it is using Open Street Maps and Tilemill: 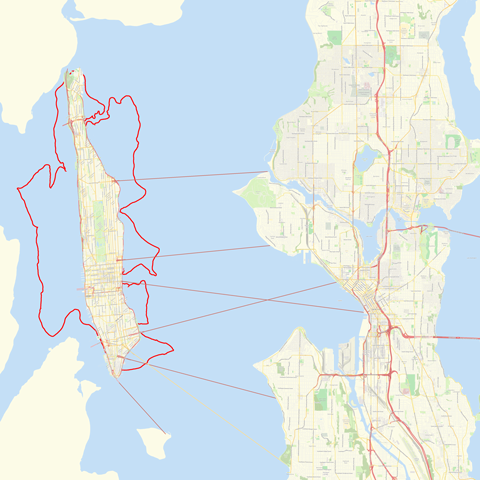 If this is too small for you, here’s a high res version.

A couple of interesting things happen. First, New York Alki connects to Seattle via the longest suspension bridges in the world and the Brooklyn and Manhattan bridges actually cross over each other just off the old coast of Bainbridge.

Downtown Seattle is connected to New York Alki via the Midtown tunnel; the Williamsburg Bridge will drop you off at Denny Way. Magnolia and Discovery Park are about to get a lot more car traffic – but they get the sunset over Midtown’s spires. And if you’re going to the airport, you’ll want to take the Brooklyn Bridge. And Blake Island now has its own tunnel.