One of the reasons Wen and I moved to the West Coast is that the outdoors here are superlative.

We’re happiest putting Cam in a backpack and hiking into the bush or exploring somewhere new.

Being from out East, we’re still pretty amazed by how large the trees can grow to be out here, so we decided to go on vacation to try and see a few of Canada’s biggest trees. Conveniently, a remarkable number of them can be found in a triangle between Port Alberni (A), Bamfield (B) and Port Renfrew (R):

We headed out for a few days making our home base in Port Alberni (which elicited confused reactions from our friends; nobody ever goes on vacation to Port Alberni).

The warmup act occurred just outside Port Alberni at Cathedral Grove. Once logging land owned by the H.R. McMillan – and now a park bearing his name – it’s a copse of old growth trees, some of which date up to 800 years. 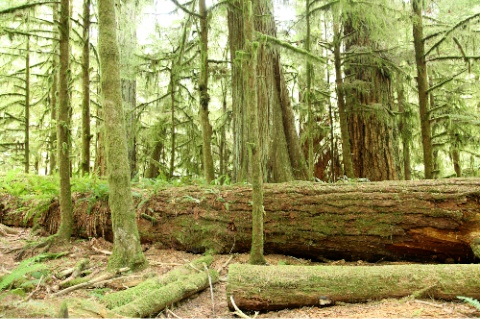 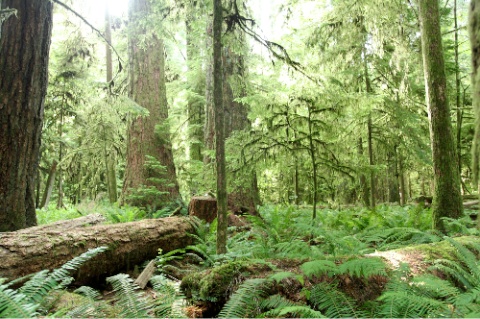 Beautiful – yes; but just a tease for the casual tourist on their way to Tofino and a clue that if you’re willing to go a little bit further, you might find something much, much better.

The much, much better stuff is found in and around Carmanah Walbran provincial park.

This park is both really close to civilization and incredibly remote. It’s only 90 kilometres or so from Port Alberni; similarly far from Lake Cowichan and Port Renfrew (there’s only one entrance to the park; you have to drive all the way around it from Port Renfrew to enter it). It’s also only accessible via logging roads.

That means that you’re driving with your headlights on so you can see through the clouds of dust raised by passing trucks. That means that unpredictably, trucks hauling logs will just appear around a corner; they have the right of way-and momentum. That means one lane bridges without railings.

That also meant that our little Prius probably wasn’t going to make it. Especially up the last 30 kilometres or so, which consisted of a tire-eating climb up a mountain, suddenly appearing potholes that were a foot deep and finally roads that were so overgrown that alder slap both sides of your vehicle.

I needed something more powerful. Fortunately, there was a Budget Rent-A-Car in Port Alberni and they were able to rent me that most red-blooded of vehicles, the Ford F-150 with a crew cab.

For comparison purposes, I took a photo of it next to the Prius:

I’d never driven a pickup before. It was like floating on air. I hit a speed bump and it felt like a crack in pavement; as we ploughed ahead on logging roads, potholes were the equivalent of a fly hitting the Prius’ windshield. The car was a masterpiece of over-engineered convenience; but Cinderalla’s carriage was also a pumpkin – it cost $88 to fill up the half a tank required for driving about 360 km (what a tax you pay in return for owning truck…).

With the F-150 I felt comfortable heading into the land-not-known-by-Google-Maps and we eventually found our way to the park: 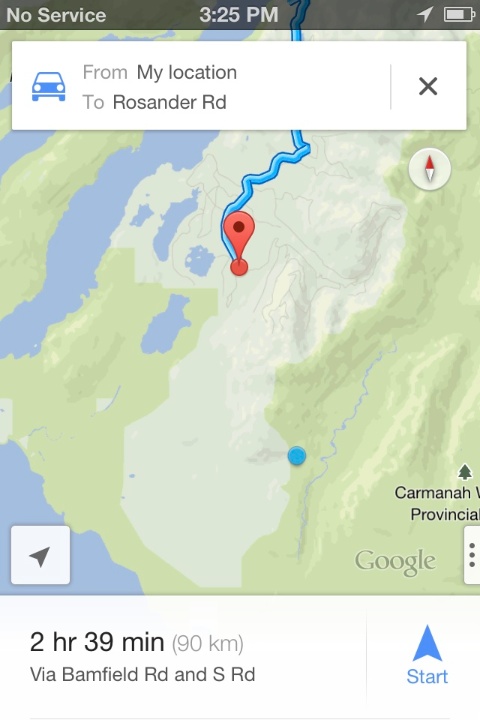 There’s only one way into the park. Ironically, it passed through a clear cut. Apparently this area was unprotected until the 1990s when public protest and uproar led to the creation of Carmanah Walbran and an increase in size to Pacific Rim National Park Reserve (for anyone who protested – thank you).

As I mentioned, the road was so lightly travelled that alder trees completely cover the road at points and slap your car as it passes. Consequently, it’s strange when you enter the park and suddenly find yourself surrounded by the infrastructure of the province. There was a formal sign. Outhouses. And free trail maps that give you an idea of how unexplored the area is: 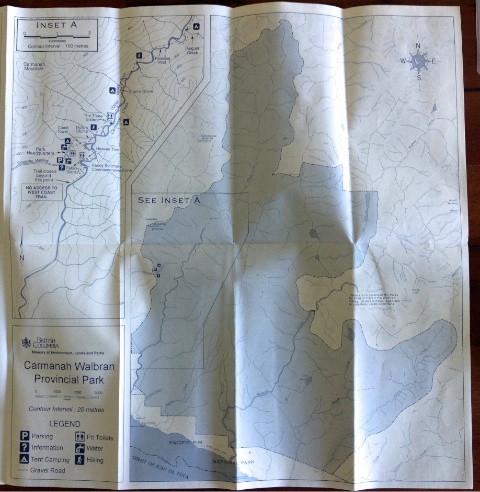 The part consisted of three valleys and only part of one is actually open. There were a few kilometres (an easy days worth) of trails; the rest was backcountry for the truly hardy to explore.

Perhaps the best indicator of the park’s remoteness is how empty it was. We arrived after noon on a Saturday and were the only people in the parking lot; one more car showed up later in the day. As we hiked my face accumulated cobwebs; we literally had a rainforest to ourselves.

Much of the hiking was along a boardwalk; we were there on a bluebird day but it was still moist and humid. There are so many large trees that we started taking them for granted (hah! – that one’s only five feet wide) and only noticed the small ones as a sort of natural disappointment. 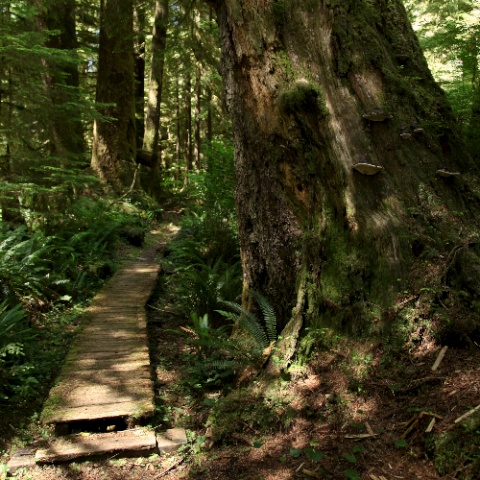 The park had some standout trees. The “Heaven” tree was a sitka that lorded over you. The Randy Stoltmann Commemorative Grove (Randy was a young conservationist integral in establishing the park) was a perfectly silent grove of massive trees next to a little river; a fantastic place for lunch: 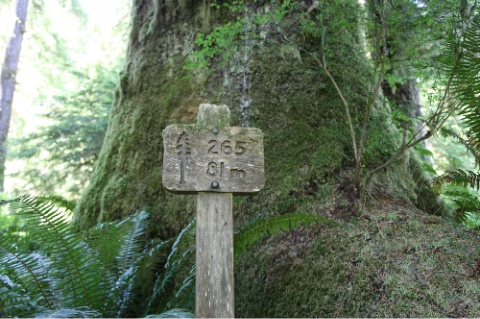 Further up the valley were The Three Sisters: three giant trees right next to one another; there was a platform in the middle where you could hang out and look straight up. 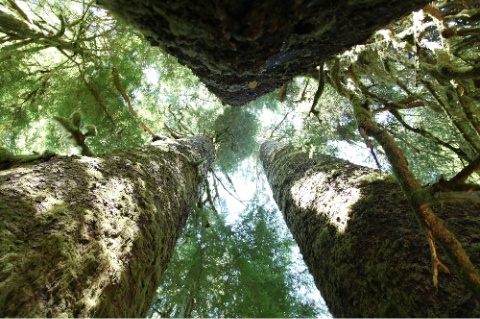 A few more shots of the park; alas the biggest tree was a supergiant that fell across the tracks a long time ago: 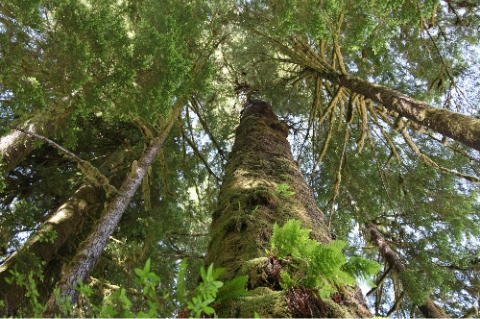 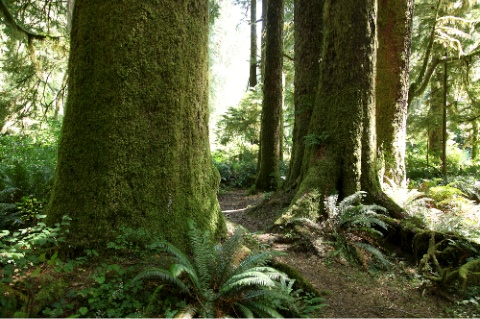 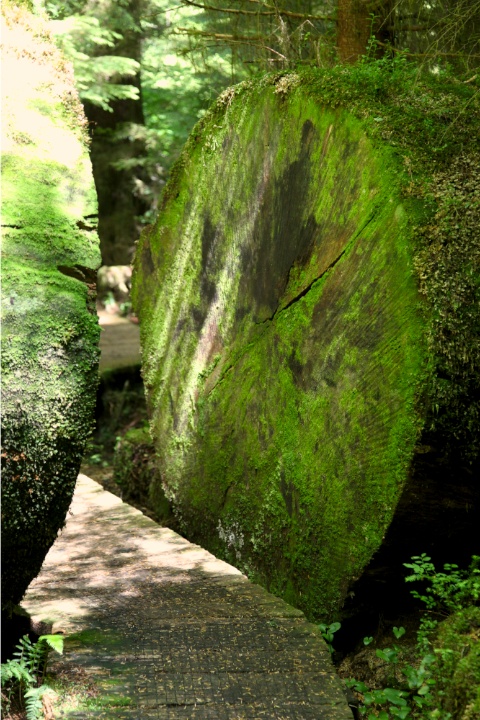 It was a spectacular park – one day I hope to come back and explore the Walbran Valley – but not home to Canada’s largest tree. Fortunately, that tree – the Cheewhat Giant – was nearby, just down the road near Cheewhat lake.

The next day we came back to find it.

This proved to be a little tough.

It’s no secret that it’s near Cheewhat Lake, but nobody’s encouraging you to go; keeping visitor traffic low is part of what’s enabled this tree to survive for 2,500 years.

There’s a trail, but it’s very casually marked. You slowly drive along the road and look for a cairn. It’s the only cairn, but then it’s also a 29km road; you need to know roughly where you are (i.e., have a GPS or preload your smartphone) or you’re going to be in for a long day.

Once you find the cairn you start on what’s initially a pretty rough trail.

The tree is safe in Pacific Rim National Park Reserve, but sadly the valleys surrounding the park are constantly being clearcut. However, since this is a rainforest the clearcuts don’t stay clear too long; alder quickly grows on them, meaning that the “trail through a clearcut” was actually more like this: 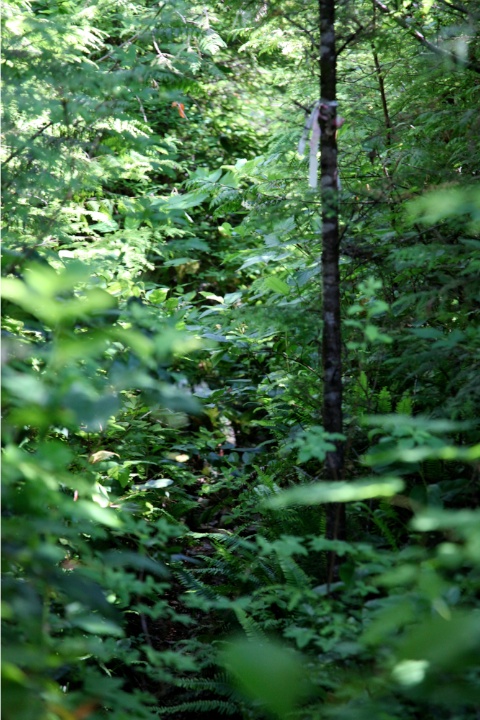 As you can see, at least it was flagged. The clearcut does get a little more open after a while and we started to see some signs of old growth. That’s a few hundred years of tree in this stump: 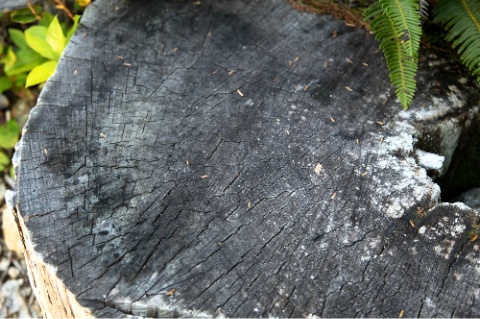 We then entered the remaining old growth forest (there are actually markers saying it’s a national park) and the atmosphere changed.

It got quieter; there were only a few birds.

The alder was mostly gone; this was an old forest of tall trees and ferns. For thousands, if not millions, of years, the forest has been collapsing on itself and regrowing. It oozed history.

We rappelled down some ropes and saw the first clue that this was a different type of forest from what we were used to. This massive tree fell over and pulled the forest floor up with it; ferns now grow on the underside of its old roots: 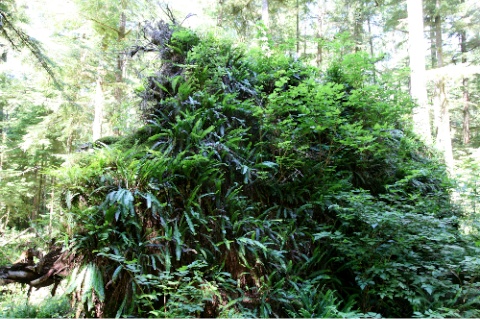 As we went deeper, the trees got bigger. Finally, we arrived at some truly spectacular giant trees that defied proportion; we could sense that the Cheewhat Giant must be nearby: 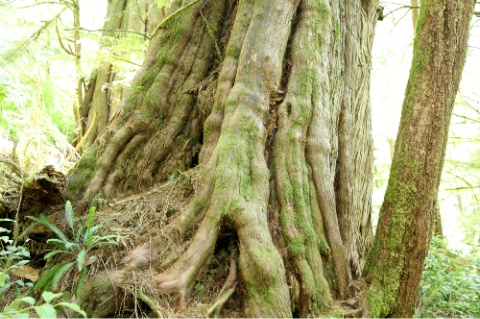 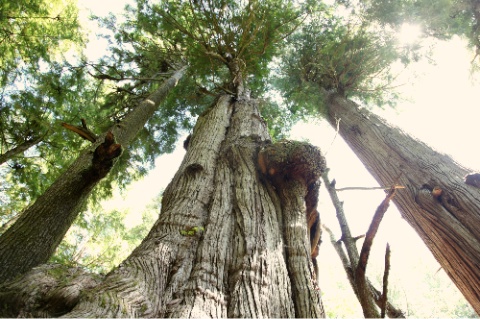 And just a few minutes later, there it was. A Parks Canada plaque officially confirmed it: 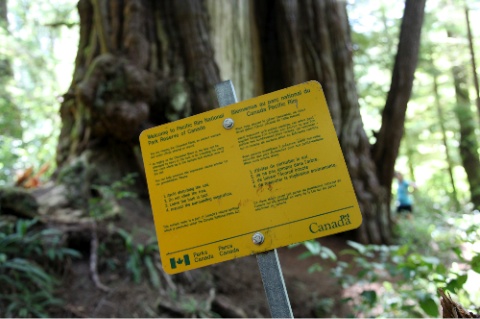 For comparison, that blue blur in the photo above is Wendy. The tree was about 20 feet in diameter; it was a living wall of wood that dates back to just a few hundred years after the founding of Rome.

It was fairly awe-inspiring to sit underneath it; instead of waiting, our son insisted on being walking in front of it dozens of times: 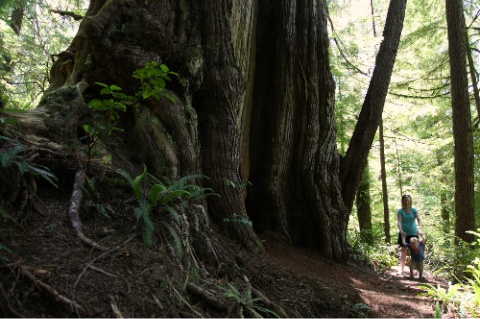 From below, the tree wood stretched well beyond what we could see: 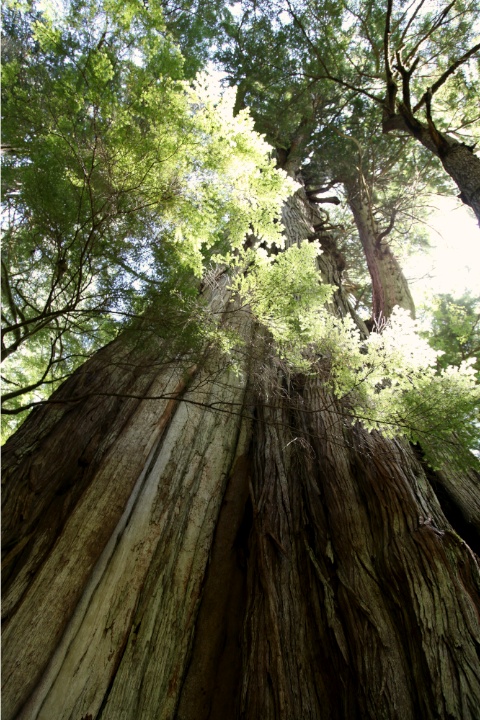 It was only by hiking below it that we could get a fuller sense of its true size: 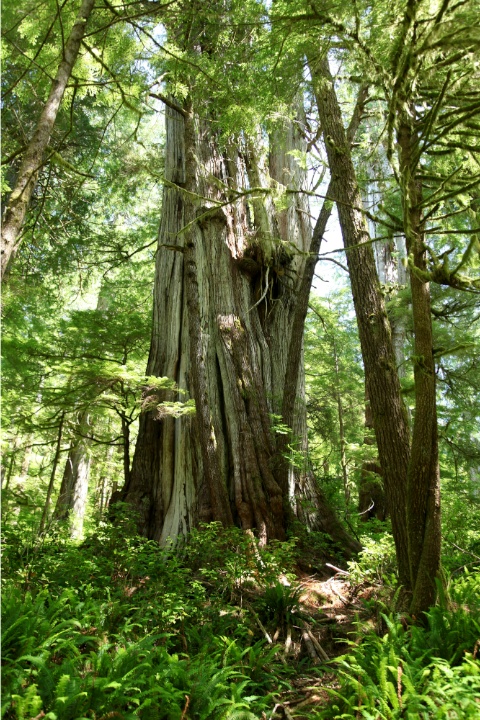 It was a special place and a unique one in Canada; I’ve been to several rainforests but this is the most ancient living place I’ve ever visited.

A great trip tree-hunting; next time I’ll have to look out for these.