One of the common themes of life today is that it’s getting faster. It’s not that time has actually sped up, rather the rate of change in society has sped up.

This is really happening; it’s not just crotchety old men pining for the days of martini lunches. One way to measure this trend is through technology adoption rates.

This chart from somewhere on the Internet shows how long it took for different technologies to reach the same portion of America’s population: 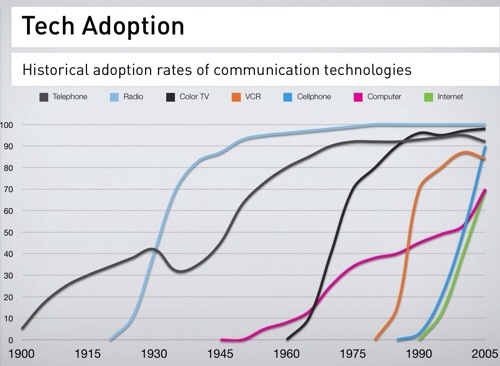 You don’t have to be a genius to see that it’s getting faster.

If you’re a science fiction fan, the acceleration continues inexorably until it’s infinite and we hit something called The Singularity. Who knows what happens then; perhaps we turn into pure energy (Didn’t realize Powder was a documentary) or we all upload our brains to computers and colonize the stars. Or maybe the rate of change stabilizes and we just end up in a period of constant – but not accelerating – change (I’ll bet on that).

This trend has some unique implications. We see, for instance, that it’s harder to stay successful. How many overnight Internet celebrities have appeared over the past few years? Similarly, the Fortune 500 lost is turning over faster then ever. Glory is increasingly fleeting.

Some more evidence of this:

I find this fascinating. You’d think the iPad is a growth hit that you could take to the bank for 10 years; now it looks like some dramatic rework is required. Ditto if you’re Amazon with your Kindles.

What I take away is that we’re in an era where we can’t rest on our laurels and we’ll have to constantly adopt new ideas and learn a lot of new things. In fact, resistance to new ideas (or at least technology) could potentially become a leading indicator of future o failure.

I’ve given up trying to predict what I’ll be doing in five years time and instead focus on learning lots of new things and meeting interesting people. We’ll see where the journey goes.